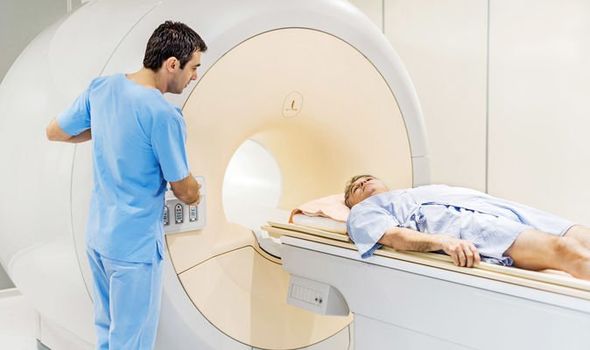 Simon Stevens, the chief executive of NHS England, said: “This further advance in NHS care for prostate cancer means patients will have safer treatment with fewer side effects. “It’s another step forward in world-class cancer care.” Prostate cancer is the most common cancer in men in the UK, with more than 40,000 new cases diagnosed every year. In radiotherapy high-energy X-rays are targeted at the prostate, killing cancer cells and preventing them from spreading. The SpaceOAR hydrogel, which is made mostly of water, reduces the amount of radiation that can affect nearby healthy organs.

It is injected before treatment starts and then remains in place during radiation therapy, before being naturally absorbed by the body after about six months.

In studies, its use has been shown to reduce life-changing side effects, such as rectal pain, by more than 70 percent.

Awareness of the disease has increased after celebrities such as presenters Stephen Fry and Bill Turnbull spoke openly about their battle with the cancer. Fry called upon men to “know your risk”.

One in eight men will be diagnosed with the disease, but if caught early enough recovery rates are high.

The decision to introduce SpaceOAR is part of the NHS’s plan to introduce “one-stop shops” across the country to speed up cancer diagnosis, saving thousands of lives in the process.

Heather Blake, the director at Prostate Cancer UK, said: “While radiotherapy is very effective at treating cancer, it can also cause side effects, including bowel, urinary and sexual problems. We welcome any proven innovations that will help reduce side effects, and are pleased the NHS is taking action to ensure they reach men as soon as possible.”