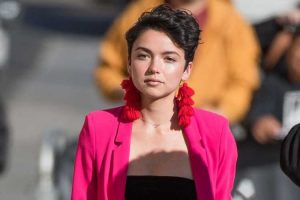 Martinez, 25, responded to a fan who told her on Instagram Tuesday that not having her daughter Ruth Ray De La Luz, 2 in February, on a consistent sleep schedule is a "big problem" that she will come to "regret."

The former Bachelor contestant shared the comment on her Instagram Stories, saying that while the commenter was likely "well-intentioned," their message was "rude and unprompted."

"She DOES have a sleep schedule we established well over a year ago," Martinez explained of her oldest child, "but she's been waking up a lot over the past couple months because we have a tiny house and she hears Frank crying while we're trying to get HIM on a sleep schedule (even though we have literally four sound machines)." "Reading messages like this just makes me feel even more frustrated. It's not helpful," the mother of two, who is currently finishing her college degree, added.

In a video shared on her Instagram Stories earlier in the day describing how tired she is, Martinez had mentioned that "neither of the babies are sleeping through the night right now. Both of them are waking up usually two times during the night." Martinez, often candid about parenting on social media, recently defended her decision to share a photo of Franklin wearing a bow, saying that everyone should "normalize" not conforming to gender-based constructs.

"Do I do things like this sometimes to rile people up? Sure, I love to see them mad. Don't get it twisted," she said on Instagram in October. "But with [my] leg hair, with putting Frank in a bow, with whatever the hell else I post, I also want to challenge people's ideas of what's right or wrong, or what you should or shouldn't do."

"I think in this particular instance, I think we should normalize being able to put boys in bows and things that are 'girly,' " she added. "What the f— is 'girly' about a bow? It's literally a piece of ribbon or fabric tied in a certain way. That's dumb. Anyway, that's all."

After calling out the unhelpful comment regarding Ruth's sleep schedule, Martinez thanked the followers who send her "love and encouragement" with another slide on her Instagram Stories Tuesday.

"It really helps me get through some days when I feel like throwing in the Instagram towel," she added.