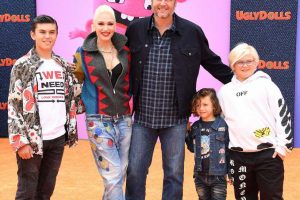 Blake Shelton may have had an ulterior motive when he invited Gwen Stefani’s sons along to his UglyDolls premiere on Saturday.

“My cool points went up with this one,” the country star, 42, joked to Extra on the orange carpet. “The kids are super excited about this movie. I’m excited for them, because it’s such a great message.”

“It’s a rare thing for Gwen and [me] to even get out at all. We don’t really get a chance to do anything,” The Voice coach admitted. “One of the two of us are working or the kids are in school — it just never works out for us to all go out. We get to do it about four or five times a year — this is one of them.”

Shelton, who sings “Wallflower and Weeds” for the movie’s soundtrack, also portrays Ox, the one-eyed Mayor of Uglyville, in the film.

“He’s super ugly for one thing. He has a big belly hangin’ off him,” Shelton joked when asked how he’s similar to his character.

In 2017, Shelton opened up to PEOPLE about his love for Stefani’s sons with ex-husband Gavin Rossdale.

“They’re so damn funny,” Shelton added. “It’s just my first time being around it, and it’s easy to fall in love with those kids. They’re pretty special.”

Shelton and Stefani made an appearance earlier this month at the ACM Awards, where Stefani shared a photo of the two, raving that she was “so proud to be this beautiful human’s date at the ACM awards tonight.” And although they’ve been dating for over three years, the No Doubt frontwoman recently said that there’s “no pressure” to get engaged.

“[You] get to a place where you find somebody that’s like your best friend, that you know you can depend on and trust and go through life,” she said. “We’re just trying to be in the moment as much as we can.”

As a Shelton source told PEOPLE in November, “Blake treats Gwen’s kids like they’re his own. They just glow when they’re together.”