From Psalm West to True Thompson: A Complete Guide to the KarJenner Kids' Debuts 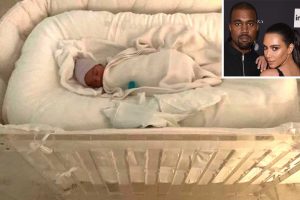 Exactly one week after Kim Kardashian West announced the arrival of her fourth child with husband Kanye West — a baby boy born via surrogate — the KKW founder finally revealed the newborn’s name. “Psalm West,” she captioned a screenshot of a text message with the rapper, which also included the first photo of their son.

The latest addition to the KarJenner crew made her mini debut on mom Khloé Kardashian’s Instagram, where the reality star, who welcomed her daughter with boyfriend Tristan Thompson in April 2018, posted a selfie while giving fans a sneek peek at True’s little arm.

Stormi made her first-ever appearance in mom Kylie Jenner’s intimate 11-minute video immediately after announcing she and boyfriend Travis Scott (né Jacques Webster) had become parents a few days earlier. Kylie’s baby girl made another splash when the beauty mogul posted a sweet close-up of her daughter’s hand holding onto her mom’s on Instagram.

Surprisingly, little miss Chicago wasn’t introduced to the world (wide web) via mom Kim Kardashian West’s Instagram. Instead, Kim’s bundle of joy was seen cuddling with a then-pregnant Kylie in a scene from the reality star’s pregnancy journey video, released on YouTube in February 2018.

“Today was amazing. I am so lucky!! Thank you [Chyna] for having our baby and being so strong!” wrote dad Rob Kardashian of his and then-fiancée Blac Chyna’s newborn daughter, Dream, on Instagram back in November 2016.

Saint made his debut on mom Kim’s website and Instagram account in January 2016 … but it was just a close-up shot of his tiny hand holding Kim’s finger. One month later, Kardashian posted a pic of Saint’s sweet face – and the entire Internet melted.

It took three months for Kourtney Kardashian and ex Scott Disick to share an adorable snap of their baby boy Reign in April 2015 — and it was well worth the wait. “My little turtle dove angel baby boy,” the Keeping Up with the Kardashians star wrote on Instagram, months after sharing an initial peek at her little one’s tiny hand.

Kourtney and Scott’s only daughter may have fronted a magazine cover for her official debut, but Penelope was actually initially introduced to the world via a 2012 episode of Keeping Up with the Kardashians, where Kourtney was filmed pulling out her newborn daughter and placing her on her chest — by herself.

Kanye West didn’t share the first glimpse of his and Kim’s daughter North until she was 10 weeks old, unveiling a candid shot of the baby girl looking over her mom’s shoulder on the Kris Jenner Show in August 2013.

His little sister, Penelope, wasn’t the only Disick kid to make their debut on TV! Mason was the first, with footage from that very moment in a hospital delivery room airing on a 2010 episode of Keeping Up with the Kardashians.