Hilaria Baldwin Recalls Learning She Miscarried at 4 Months Pregnant: 'My Baby Was Lifeless' 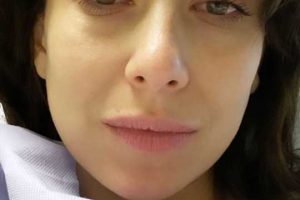 Hilaria Baldwin is opening up about the moment she learned she had suffered a miscarriage at four months pregnant.

One week after publicly revealing the news of her miscarriage, the mom of four continues to share updates on her health, especially after her recent miscarriage in April. On Monday, Baldwin, 35, reflected on the doctor’s appointment during which she was told that she had suffered another miscarriage.

“Was so excited to have my scan and see my daughter. I was so nervous all day. Perhaps it was some sort of knowing what was going to come or evidence that pregnancy after loss is stressful,” she wrote on her Instagram Story.

“I lay on the table and the technician put the sonogram on… and we discovered immediately that my baby was lifeless. It was one of the worst feelings,” recalled Baldwin, who had announced her latest pregnancy in September.

Baldwin also thanked her supporters and followers who reached out during her difficult time. “I have been so lucky to receive such love and support from my friends, family and you. One of the elements of all of this that has been amazing is how many of you shared with me that you have experienced something similar. Whether that be miscarriage, still birth, chemical pregnancy, infertility,” she said.

In another Instagram Story, the star further opened up about why she has been so transparent about her loss.

“It’s been an interesting experience being a part of this effort of removing stigma about pregnancy difficulties and loss. Opening up and sharing began as protective measures against industries attempting to monetize elements of my life,” she said. “However, it ended up in a great lesson for me on how cathartic it is to share.”

RELATED: Emotional Hilaria Baldwin Undergoes D&C After Miscarriage at Four Months Pregnant: ‘I Made It’

Over the weekend, Baldwin gave an update on how she is coping.

“Little update: I’m doing better,” she wrote on her Instagram Story. “I have my moments when I feel better then I have moments when I will get really sad. But I feel like time and healing and everyone’s support is helping me.”

Baldwin added, “Spending time with my babies and husband helps so much. I’m so lucky to have them. My heart goes out to those of you who suffer like this without support. You are true warriors. I send you my love and admiration.”