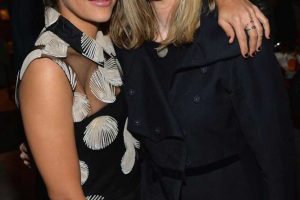 Rashida Jones is opening up about a "very emotionally intense couple of years."

The On the Rocks actress, who turns 45 on Thursday, welcomed her first child, a son named Isaiah, with her partner, Vampire Weekend singer Ezra Koenig, in August 2018. Eight months later, in May 2019, Jones' mother, actress Peggy Lipton, died from cancer at age 72.

Jones tells NPR about struggling with the excitement of becoming a mom and with the grief of losing a parent simultaneously.

"This has been a very emotionally intense couple of years," she says. "… It was sort of like back-to-back-to-back-to-back, just wrenching, pulling my heart in all different directions. … I was in grief-shock. I don't even know if that's a word, but I was just not in my body at all and just had a baby. I was doubly not in my body."

"The thing that's the craziest about birth and death is just the utter rawness of feeling," continues Jones. "I still feel this way, I think. It's like something cracks in you. It's very binary, both things — becoming a mother and losing my mother — like, there's my life before and there's my life after. And strangely, there's something that's not recognizable before those two things happened."

"It's just this utter rawness of emotion where it doesn't matter where I am, what I'm doing. If I'm overwhelmed by that grief or that joy, that's it," she adds. "I have to feel that thing. I can't suppress it. I can't run away from it. It's just there."

Lipton, best known for her roles on The Mod Squad and Twin Peaks, died on May 11, 2019. Her death was confirmed by Jones and her sister Kidada, whose father is music producer Quincy Jones.

"She made her journey peacefully with her daughters and nieces by her side," the sisters said in a statement at the time. "We feel so lucky for every moment we spent with her."

"We can't put all of our feelings into words right now, but we will say: Peggy was and will always be our beacon of light, both in this world and beyond," they added. "She will always be a part of us."

This past August, the Parks and Recreation actress paid tribute to her late mother on what would have been her 74th birthday. "Happy birthday mama," Jones wrote alongside a black-and-white portrait of Lipton. "I feel you smiling down on us. Miss you every day in every way."

Tim Robbins on How Proud He Is of His Kids &amp; How He Wants to Be the 'Mischievous Grandfather'