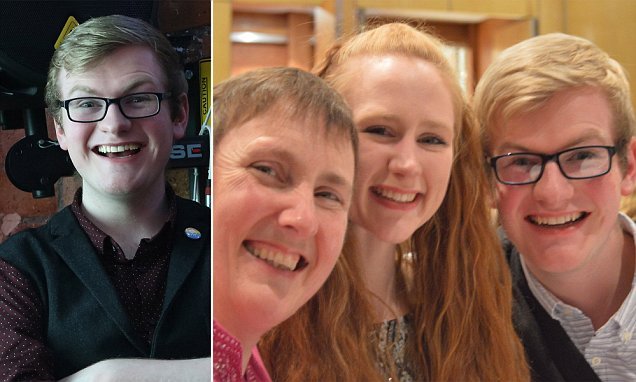 18-years-old and still wetting the bed: University student, who wore nappies until he was 7, speaks out about his lifelong bladder problem

When teenager Seb Cheer started university this year there was one extra thing he had to plan for – without medication he risks wetting the bed.

Mr Cheer, 18, from Cardiff took medication until last year to control his overactive bladder, and still takes it when he’s not at home.

His condition means his bladder muscle contracts spontaneously and without his control – leading to a sudden urge to go to the toilet.

Although the problem is manageable at home and he is beginning to cope without medicine, Mr Cheer says finding the toilet is the first thing he has to do when he goes somewhere new.

He has suffered with an overactive bladder for his whole life, wearing nappies until he was seven, but says he is confident at dealing with it and was not bullied as a child.

Mr Cheer, a student at Leeds University, is sharing his story in the hope other young people with the condition will be encouraged to be open about it. 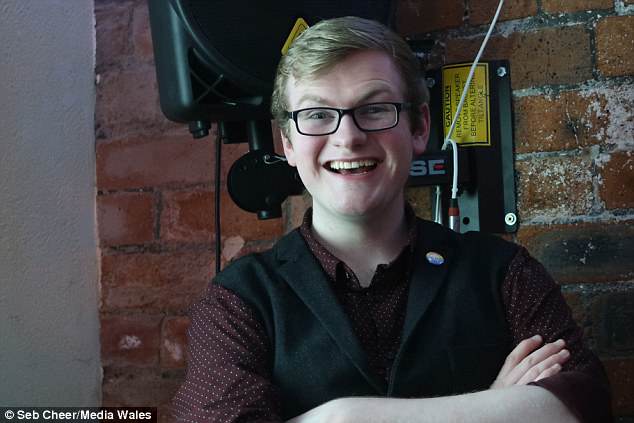 Seb Cheer, from Cardiff, has had an overactive bladder for his whole life and is now starting university

Mr Cheer’s case is not unique – an estimated one in 10 school-aged children wet the bed and, according to Bladder Health UK, one in six adults have symptoms of it.

‘Without my tablets, I’m taking a risk that I’ll wet the bed,’ the first year Leeds University student says.

‘I can take that risk at home, because my bed is fitted with special absorbent sheets. I can’t take that risk if I’m staying with friends or if I’m camping.’

And even with the medication Mr Cheer has to navigate the dosage, which means he cannot drink for an hour before taking it or eight hours after – timing which doesn’t always work well with university social life.

But Mr Cheer’s overactive bladder does not just affect him during the night.

The journalism student also has to avoid wetting himself during the day – something he says was harder at school than it is at university.

At university there are fewer classes and he doesn’t have to ask permission to go to the toilet like he did at school at Bishop of Llandaff High in Cardiff.

But he still needs to know where the nearest toilet is at all times.

‘A lot of forward planning has to go into everything’

‘A lot of forward planning has to go into everything,’ he said. ‘As soon as I arrive in a new place, I need to work out where the toilets are. I can’t drink much caffeine.

‘I know that I have it relatively easy. Life is harder for a lot of young people with more complex conditions.’

Now, Mr Cheer is trying to reduce his reliance on the drugs and says it is easier to cope with as he gets older.

He said: ‘I am not totally sure if i will grow out of it but my brain is beginning to cope with it. 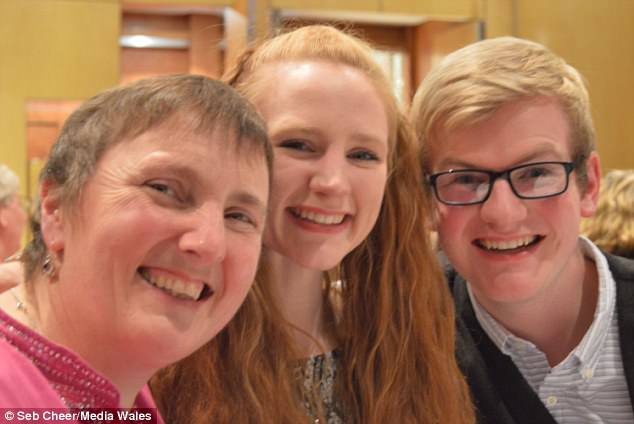 Mr Cheer, pictured with his mother Brenda and sister Alice, hopes speaking out about his experience will help more young people to realise there are others like them

‘Coming from school to university has been a bit easier because there is less contact time and you don’t have to ask to go out to the toilet.

‘I think schools are generally rubbish when it comes to going to the toilet. People should just let you go to the toilet when you need.

As a child, Mr Cheer was still wearing pull-ups aged seven and had to take a change of clothes to primary school every day.

But his mother Brenda, a specialist paediatric nurse for young people with bladder and bowel problems, always told his schools about his condition and made sure he would be allowed out of class to relieve himself whenever he needed.

WHAT IS AN OVERACTIVE BLADDER?

Overactive bladder (OAB) is a common medical condition in which the bladder muscle contracts too often or spontaneously and involuntarily.

Sufferers may feel the need to urinate more often and without warning, and some will have incontinence and wet themselves.

There are various causes of the condition which may include a urinary tract infection, obstruction of the urine flow, brain conditions like Parkinson’s or damage from a stroke, or some medications.

Caffeine and alcohol can make the condition worse.

The main symptoms are urinating often, not having much warning before it happens, leaking urine during sleep or during sex, or having to get up in the night to go.

Overactive bladder can affect anyone at any age – one in six adults are thought to have symptoms of it, and it becomes more likely with age or after childbirth.

By the time Mr Cheer reached secondary school, aged 11, he was on medication and his mother told teachers he had to be allowed to go to the toilet whenever he asked.

‘I was never teased about it at school and because it was so normalised at home I was quite confident dealing with it,’ says Mr Cheer.

‘I remember when I was six or seven a friend asked why I was still wearing pull ups and my mum explained to her that she had some older patients aged 16 or 17 still using them.’

Raising awareness among other young people

Realising many young people with similar conditions may not be at ease being open about such a potentially embarrassing issue, Mr Cheer wants to share his story to help raise awareness.

It is something he decided to start talking about when he was 15.

His school gave him permission to miss a GCSE maths exam to address a conference organised by the ERIC, The Children’s Bowel and Bladder Charity.

The charity supports 900,000 children and young people in the UK who suffer from a bowel or bladder condition.

‘It would be good if more people could talk about it more easily,’ Mr Cheer added.

‘I have taken part in focus groups to encourage young people with bladder issues to talk openly, but it is quite rare.’

‘If you are a young person struggling with bladder or bowel problems you have to remember there are lots of other people like you in the UK.

‘There is almost certainly someone who has had the same experience as yours.’

Mr Cheer’s sister, Alice Cheer, 20, says there can be stigma talking about it: ‘People don’t like talking about wee and poo problems.

‘I’ve seen first hand the impact continence problems have on not just the young people suffering, but their families too,’ she said.

‘Wetting is seen as something toddlers grow out of’

Mr Cheer’s mother, Brenda, agrees: ‘Wetting isn’t seen by society as a medical condition, it’s just something everyone does as a toddler and then they grow out of it.

‘But for many, it’s a symptom of a bladder or bowel condition which needs treating.’

A Parliamentary report – It Happens To Me Too – published in March this year, confirms what Brenda says, showing one in four people believe that bladder and bowel problems only affect the elderly.

To donate to Alice’s fundraising visit her Just Giving page.