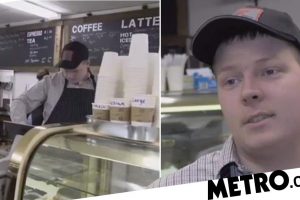 Michael Coyne has spent two years trying to find a job, which he feels is because he is autistic.

He plays sports with the Special Olympics of Rhode Island which provides activities for those with intellectual disabilities but professionally, he has struggled to find work.

Now, he’s had to take matters into his own hands and decided to open a coffee shop, with the help of his mum.

Michael, who also has attention deficit hyperactivity disorder (ADHD) and bipolar disorder, wanted to hire staff with special needs to give them a leg-up.

Using the rejection as motivation, Michael started business classes at the state’s Developmental Disabilities Council to learn tricks of the trade.

His mum Sheila also helped set it up so they could help the disabled community.

The pair want to be as inclusive as possible and hope that in the future it can be even more accessible with equipment that helps disabled people.

For example, using a barcode scanner instead of entering prices manually or getting a milk steamer that automatically shuts off.

Though in its infancy, Red, White & Brew has given hope to others with developmental disabilities.

‘It’s just a beacon of hope for people with disabilities,’ Michael told local paper The Valley Breeze. ‘We just want to integrate.’

Mum Sheila added: ‘We’ve had parents come in with tears in their eyes with the hope that their young children will eventually be accepted into the community.

Man, 60, is left with HYPOTHERMIA ‘because of his epilepsy medication’

Man grew a BUBBLE under his skin when air escaped his lung
autistic, coffee, couldn't, find, for, Him, His, job, Like, Man, Opens, others, own, shop, Who
Latest Posts