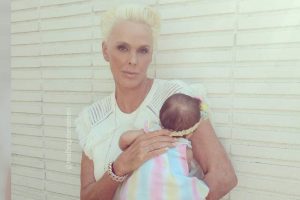 Model and actress Brigitte Nielsen doesn’t sound anything like a tired new mom when I catch her coming home from a morning walk with her new baby, Frida. As she speaks to me over the phone, I can sense how thrilled she is at being a new mom. “I feel great, and it’s just very, very exciting,” she beams.

Nielsen announced she was pregnant–with some stunning mom-to-be Instagram posts–at age 54, to the Internet’s delight. Now, newly 55, she shared what postpartum life is really like.

She has to stay healthy for her baby

Nielsen reveals that she had to maintain a positive outlook during pregnancy. Considered a high-risk pregnancy at 54, her greatest fear was losing the baby; she had to take good care of herself and hope for the best. “We were very lucky,” she says. “My husband is an incredible support.”

It’s not always safe to get pregnant later in life, even though it is possible. “A 50-year-old woman’s body isn’t necessarily built to withstand the strain of a pregnancy,” points out Bat-Sheva Lerner Maslow, MD, a reproductive endocrinologist at Extend Fertility in New York. The amount of blood circulating through your body increases when you’re pregnant, and if you’re older, your heart might not be able to handle the stress. Women over 35 are not only at a greater risk for developing high blood pressure and gestational diabetes during a pregnancy compared to younger women, but they’re also at greater risk of miscarriages and stillbirths, according to the American College of Obstetricians and Gynecologists (ACOG)​​​​​​.

The work isn’t over for Nielsen, as she’ll need to continue to prioritize her health even after giving birth to Frida. “I’m going to have to keep myself healthy, because I’m 55 and I have a newborn. So I have to at least live to be 90 so I can keep up with her,” she says. In the meantime, though, she’s reveling in finally having a “princess” after mothering four sons (Raoul Meyer Jr., 23, Douglas Meyer, 25, Killian Gastineau, 28, and Julian Winding, 34).

The new mom did admit to one difficult part of this otherwise joyful postpartum period: feeding times. “Whether you’re 20, 30, 40, or 50, you’re waking up at all hours of the night to feed your baby, which can be exhausting,” Nielsen says. “Am I tired at times? Of course I am, but it’s only natural.”

With her four previous sons, Nielsen had two natural births and two cesarean sections. Nielsen had a C-section with Frida and says that this latest pregnancy was actually “better” than the previous four. It may have been 23 years since she last experienced being pregnant and giving birth, but Nielsen says she’s recovering well and isn’t feeling nearly as insecure with Frida as she was as a new parent with her first son. This time around, she knows what to expect.

Although bonding with her daughter and being present for Frida is important to her, Nielsen doesn’t plan to give up her career. “I love my family, they are the biggest part of my life, but I also love to work and I love to travel, and I have no intention of stopping that,” she says.

What the experts say

A woman’s chances of successfully conceiving the old-fashioned way start to decline at age 32, according to the ACOG. After age 37, it becomes increasingly difficult, and experts estimate that after 50, the likelihood of a woman getting pregnant naturally drops to maybe 1%. Many women stop menstruating around 51. Which made us wonder: If a woman does become pregnant on the cuff of menopause (or even after), how might that affect her on an emotional level?

First off, let’s tackle conception: Using eggs previously frozen–as Nielsen did–is one option. Women near or already in menopause can also conceive using a donated egg from a younger woman. “In order for conception to occur, the woman must undergo hormonal supplementation to prepare the uterus for implantation, specifically with estrogen, similar to what a younger woman would experience in her normal menstrual cycle,” Dr. Lerner Maslow explains.

That added estrogen–and the estrogen the placenta produces during pregnancy–”may also reverse some of the [hormone-related] menopausal symptoms,” Dr. Lerner Maslow adds, like hot flashes or vaginal dryness.

Then, there’s the postpartum period. Estrogen levels decline dramatically for most women–but certainly would for someone who is post-menopausal and won’t go back to having a menstrual cycle. There isn’t a lot of data on women over 50 being more or less prone to postpartum depression or other mood changes after giving birth. One study of a group of pregnant Canadian women found that after giving birth, depression was more prevalent in women ages 40 to 44 than in women ages 30 to 35.

As for Nielsen, nothing seems to be getting her down as she makes motherhood in her 50s look, well, blissfully easy. Men–and not only in Hollywood–aren’t deterred from having kids in their 60s and 70s, she points out. “If the men can do it, so can we.”

While biologically, it might be a little more involved–hello, menopause–Nielsen is proof that women don’t need to feel the pressure of their biological clocks ticking quite so loudly.

What to eat before a workout and when to eat it

A new drug could strip pancreatic cancer of its defenses
54–and, a, at, Be, Brigitte, It's, Like, Mom, new, Nielsen, NOT, Shares, think, to, what, You'd
Latest Posts