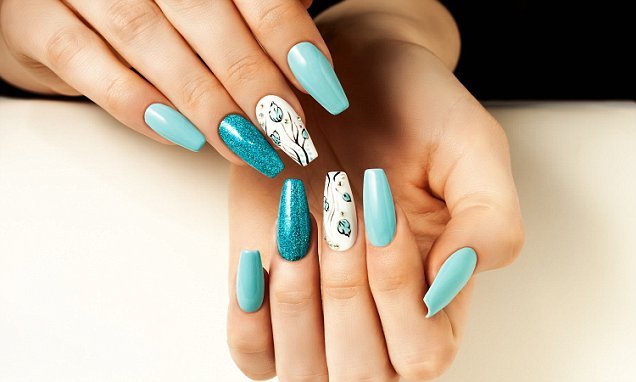 What the chemicals in acrylic and gel polish are really doing to your nails and health: Experts warn of allergic reactions that can spread to the face and genitals

The chemicals used in acrylic and gel nails are causing an allergy epidemic, according to the charity British Association of Dermatologists (BAD).

Some 2.4 per cent of women are allergic to chemicals, known as methacrylates, in such nail enhancements, which can cause their nails to loosen or their skin to develop a severe, itchy rash, BAD warns.

Such a reaction can spread to wherever the nails comes into contact with, which may include a person’s eyelids, face and even their genitals. In extreme cases, hand swelling and breathing difficulties can also occur.

BAD describes such allergies as a ‘Europe-wide phenomenon, overwhelmingly affecting women’. Previous research suggests 93 per cent of reactions to methacrylates occur in females.

Although reactions are worse when people use at-home kits, even professionally applied acrylic and gel nails can cause reactions if technicians are poorly trained, BAD adds. 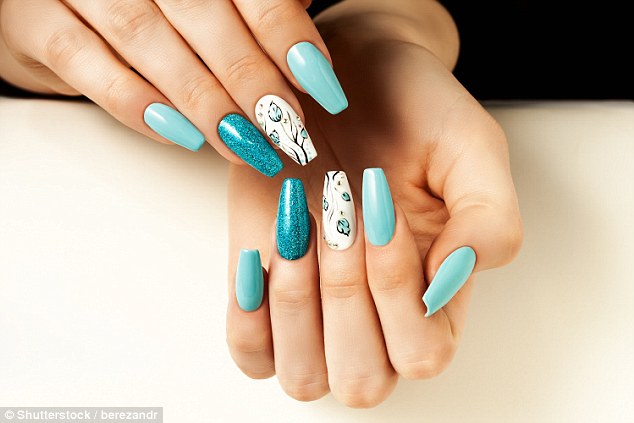 The chemicals in acrylic and gel nails are causing an allergy epidemic, charity warns (stock)

Dr David Orton, from BAD, said: ‘It is really important that people know they can develop allergies from artificial nails.

‘The truth is that there will be many women out there with these allergies who remain undiagnosed, because they may not link their symptoms to their nails, especially if the symptoms occur elsewhere on the body.

‘It is important that they get a diagnosis so that they can avoid the allergen, but also because developing an allergy to these chemicals can have lifelong consequences for dental treatments and surgeries where devices containing these allergens are in common use.’

Methacrylates are not routinely included in allergy patch tests and therefore the number of people who react to such chemicals is thought to be vastly underestimated.

In an audit of 13 UK and Irish dermatology clinics in 2017, 4,931 patients were tested for methacrylate allergies, of which up to 2.4 per cent suffered a reaction.

Of those who reacted, 60 per cent developed their allergy through ‘recreational exposure’ while having the nail enhancements fitted.

In 33 per cent of cases, allergies occurred in nail technicians while working.

The remainder of cases took place due to methacrylate exposure from medical adhesives or dental materials, where the chemicals are also used.

Results suggest that 19 per cent of people experience side effects from acrylic nails applied in salons, while 16 per cent suffere adverse events from gel polish nails.

Such complications include nail damage and allergic dermatitis, such as itching and swelling of the eyelids, cheeks and neck.

The study also found that 26 per cent of people apply nail enhancements at home, of which 11 per cent find kit instructions inadequate.

WHAT YEARS OF GEL POLISH IS REALLY DOING TO YOUR NAILS: YOUTUBER REVEALS THE SHOCKING REALITY OF HER MANICURE UNDER A MICRSCOPE

She disgusted her followers when she took a look at her skin, eyes and eyelashes with and without makeup under a microscope, with many declaring it ‘scary’ and ‘freakishly satisfying’.

And in August 2018, Melbourne-based YouTuber Tina Yong, returned with her microscope to take a look at her nails after years of gel manicures.

The video revealed everything from tiny bits of hairs to damaged, fragile nails, cuticles filled with dead skin, and a whole pile of fluff. 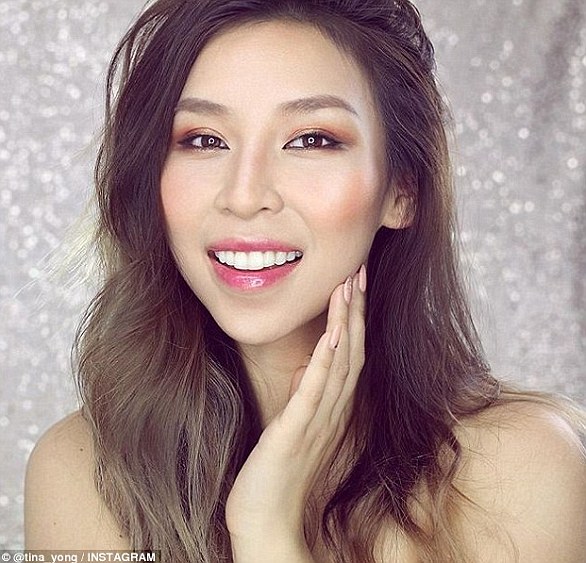 Towards the beginning of her video, Tina explained that she intended to take a look at her nails under the ‘Tinascope’ because ‘a lot of you guys have requested it’.

‘I have one hand with gel nail polish on and the other hand is bare,’ Tina explained. ‘I have not had bare hands in a very, very long time.

‘I always have gel nail polish on my hands. It has been about five or six years. I don’t even use normal nail polish. So it’s time to see what my nail beds, cuticles and even underneath my nails look like.’ 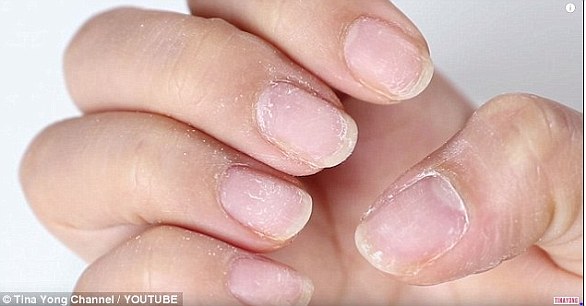 Picking up her Wi-Fi-enabled digital microscope, Tina first took a look at the hand with the gel nail polish on.

Confessing she had had the polish on for about two weeks, she admitted it wasn’t perfect and had a couple of chips.

‘I’m going to compare the nails with gel polish on with the ones that I’ve removed. You can see it looks pretty damaged,’ Tina said. ‘This is how it always looks when I remove my gel polish. They look scratched and thin.’

When she ran the microscope over her gelled nails, the beauty YouTuber exlaimed: ‘Oh my god, that’s so bad. Look at my ring finger! There’s so much fluff and little hairs stuck underneath.

‘And how much dead skin do I have underneath my nails? It looks like Ice Age! It’s like lots of icebergs around my cuticles.’ 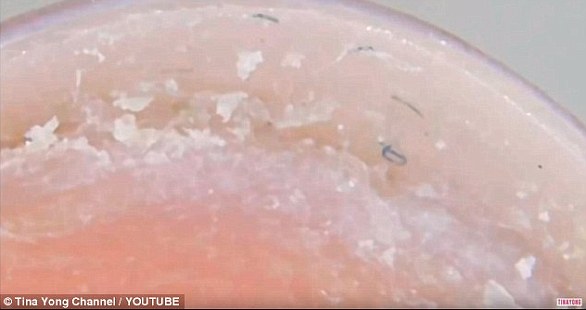 Tina said: ‘Oh my god, that’s so bad. There’s so much fluff and hairs stuck underneath’ 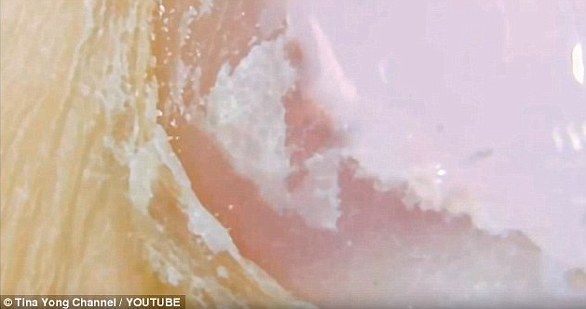 She added: ‘How much dead skin do I have underneath my nails? It looks like Ice Age!’

Moving on to the hand where she had removed the gel nail polish, before she set off with the microscope, Tina remarked that you can see ‘scratches and little white bits’ all over the nails.

‘That’s where my nails have been lifted and peeled off because of the gel polish,’ she explained.

‘Usually, if you use normal polish, your nails won’t look like this when you remove it. They will still look smooth, even and you wouldn’t see these little white bits. But when you use gel, this is what happens.’

Once she took a look at her removed manicure, Tina saw how yellow her nails really were.

‘My nails have never been that white colour, they’ve always been an off white, or sometimes a yellow-y colour like this. You can see all that dead skin underneath. And because I’ve soaked it in acetone, it looks even worse.’

Antibiotic side-effects in kids lead to nearly 70,000 ER visits in the US each year