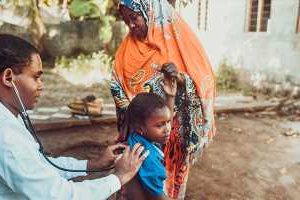 Delivering care to underdeveloped regions is vital work, but by no means is it easy. While it’s easy to point to new care-delivery technologies like telemedicine as types of magic bullets, deployments both small and large require extensive groundwork and preparation to tackle unexpected difficulties.

“Telemedicine is known for bringing care to the underserved, but many underserved patients live in areas with inherent logistical challenges like lack of clinicians, [and] inability to access proper transportation, electricity and internet,” Yaya Mbaoua, CEO of the Mbaoua Group, said during a recent HIMSS20 digital presentation. “An effective virtual health appointment can really work miracles, but only when leaders bring the right clinical expertise, the right technology and an intelligent strategy.”

Both Mbaoua and his co-presenter Krystylle Richardson, CEO of TeleMed United, have had experience deploying telemedicine pilots and tech-enabled clinics to rural areas of Africa. The former supported a United Nations-funded pilot in Zimbabwe that outfitted 12 rural clinics, two district hospitals, one provincial hospital and one national referral hospital, while the latter was hands-on at pop-up telemedicine clinics in rural Ghana.

Both speakers said that their programs appear to have been successful in driving faster, more specialized care, with Richardson in particular noting a staggering demand for their services.

“We saw over 400 patients and did over 1,000 exams in two days. Some of the patients walked miles and miles on foot to get there and be examined,” she said. “[One] lesson learned was to expect an overwhelming demand for care. There were so many people that needed to be seen [that] we even needed to stay overnight to make sure we saw everyone.”

While this kind of high utilization is encouraging, Richardson and Mbaoua’s other takeaways from their experiences were more focused on how to ensure that these telemedicine programs won’t fall apart at the seams.

Chief among these was the challenge of educating local care providers on how to use the new technologies.

“After a few weeks of deployment, the initial consultation volume was very low, mostly because of lack of confidence in using the systems. Some of the staff sent to training workshops had no direct involvement with telemedicine equipment, which really missed the opportunity to train the right personnel,” Mbaoua said. “You’ll be dealing with providers from different regions and backgrounds, and ages, so you need to align them on best practices, procedures and care protocols. And you should expect a generational gap in technology adoption because some older clinicians, especially in rural areas, will be reluctant to adopt the new practices because they have been using the paper-based, manual processes for decades.”

In some cases, Mbaoua said that the answer for this challenge was offering incentives such as free airtime for calls between clinics, and in some cases even providing free tablets to care providers to become familiar with on their own time.

But greatest staffing challenge was countering a general skepticism among rural clinic teams that the new technologies would be effective, or run as promised. In many cases, the latter concern wasn’t unfounded. Both speakers highlighted networking or electricity issues that prevented continuous use of the services.

Richardson said that her project countered these by prioritizing backup plans that would keep services running when these blackouts and brownouts would occur, while also emphasizing the need for flexibility and creativity when such problems arise. Mbaoua highlighted the need for established electricity standards, internet access and other logistical arrangements for shipping, storage and transportation when deploying in disadvantaged areas.

Still, not every roadblock can be planned for. Mbaoua said that his project encountered extreme cases of VSAT communications-system outages tied to Tropical Cyclone Idai, which hit parts of Zimbabwe in March 2019 and killed more than 1,200 people. On the other hand, the natural disaster actually provided his telemedicine program an opportunity to shine and demonstrate the value of remote care.

“[Following the cyclone], telemedicine clinics relieved pressure on overwhelmed hospitals by providing remote consultations during the disaster-management and recovery efforts, and [by] helping wounded patients see doctors immediately,” he said.

Telemedicine projects such as these should all be targeting a long-term change to the local culture of care and health education, Richardson said, even if a project is designed as a temporary clinic. For Mbaoua, that means enlisting leaders at the local community and high-ranking government levels to help champion the projects, and to establish solid project-management methodology that ensures each rollout is efficient, effective and long-lasting.

“Roles should be clearly defined, with contracts designating responsibilities and resources, and you need to allocate resources efficiently,” he said. “And deploying telemedicine in a large geographic area often means a higher implementation-cost as well. It’s really, really important to keep that in mind.”

One Medical beats Q1 expectations, as it continues to deal with COVID-19 obstacles

What happens to your body when you hold in a fart

The fitness industry is overwhelmingly white – and that needs to change
and, challenges, change, culture, disasters, expect, in, Natural, other, piloting, regions, Telehealth, to, underserved, when
Latest Posts