Home » Health News » Detroit Nurse Who Survived COVID Now Helps People Get Vaccinated: 'I Was So Sick I Almost Died' 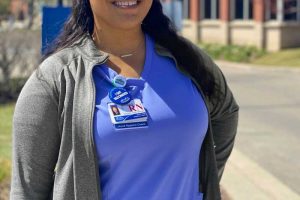 Monique Morris woke up in the middle of the night on March 23, 2020 — and she couldn't breathe.

It was the first wave of the pandemic, and the 38-year-old nurse had been giving breathing treatments to COVID-19 patients. While she didn't have a fever and her oxygen levels were normal, she knew something was wrong.

At an emergency room near her home in Wayne, Mich., a chest X-ray showed a mass in her lungs. A CT Scan of her lungs showed it wasn't cancer, but dense COVID-19 pneumonia.

"The doctor said, 'You can get admitted, or you can go home and self- treat.' I thought, 'I'm a nurse. If I can just go home and take the antibiotics, and the inhaler, and the steroids, I'll be alright,' she says. "So I went home. I didn't even last 24 hours."

She happened to have a pulse oxometer used to measure oxygen levels. It showed that her levels were not going above 88%, and her heart rate wasn't going below 120. (A person's resting heart rate should be between 60 and 100, and their oxygen should be 92% or greater, she explains.)

"I knew that I was in trouble," she says. On March 25 her husband rushed her to Detroit's Henry Ford Hospital, where she works. She was given oxygen and placed on a drug trial.

When she didn't improve she was moved to the ICU and put on a ventilator, which she fought. At the time, she says, about 80% of patients placed on a ventilator didn't come off.

"It took six or seven people to hold me down. These are my peers. These people know me. I know I kicked someone. My manager was there holding my hand and telling me everything was going to be okay and they would call my husband and let him know. They sedated me, and paralyzed me, and put me in restraints. I was on a ventilator for nine days," she says. "I was so sick I almost died."

Just a week before, she had picked out her wedding dress. She and her husband had a private, secret wedding ceremony in their living room in August 2019, but had been planning an August 2020 wedding with friends and family.

"Nobody knew I was married except my manager," she says. "The doctor called my husband and said, 'She's not improving. Do you know what her wishes are?' "

But then they pronated Monique, flipping her on her stomach so her lungs could expand.

"I remember telling myself, 'Breathe Monique, just breathe,' " she says. "I couldn't. It was hard. It was a true effort every second for me to breathe."

On April 5, she was taken off the ventilator.

"It was a real fight. A real fight to breathe. A real fight to live," she says. "They tell you your life flashes before your eyes when you're going to die. I told my husband: The only thing I could think about, was getting back home to him, to the life we're supposed to have together. The children we're supposed to have together. We had just bought a home. There was so much I wanted to live for."

For more of Monique's story, pick up a copy of PEOPLE, on newsstands now Her husband, 38-year-old Darryl Morris, Jr., wasn't allowed to visit her in the hospital.

"For the whole time, 9 days, I paced our living room in a figure eight every day for about eight to ten hours," he says. I stayed faithful, knowing that God wasn't through with her yet."

When they removed the ventilator and she FaceTimed him, he stood in the living room and cried. "That was a beautiful day," he says.

Monique had to have extensive physical therapy to learn how to walk again. Her family didn't want her to return to work in the medical field, but she was determined to get back to treating patients.

Her husband explains it like this: "My only comparison would be like soldiers that go to combat — and they tell you, 'Don't go back,' but you do anyway because you believe in what you're doing, fighting for your country. You believe your comrades need you," says Darryl, an Army sergeant who served three tours in Iraq. "But I was definitely terrified."

Monique was fully vaccinated in February. Now she shares her story and screens patients eligible for vaccines before they are discharged from the hospital.

"A year ago, I was in the hospital fighting for my life. There's still so many people who haven't experienced it to that extent, and they don't think the vaccine is necessary. But for even one person I can reach out to educate and inspire to do the best for their family, it means the world to me," she says. "I became a nurse in the first place to help people and help families and help communities be healthier."

College Student, 20, Found Dead in Dorm Room After Testing Positive to COVID-19: 'This Loss Is Forever'

Couple Who Played Santa and Mrs. Claus Test Positive for COVID-19 After Taking Photos with Children