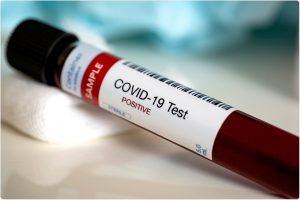 An encouraging new study published on the preprint server medRxiv* presents evidence that a prior history of infection with the severe acute respiratory syndrome coronavirus 2 (SARS-CoV-2) provides immunity that is strong enough to prevent reinfection for at least a year in the vast majority of individuals. 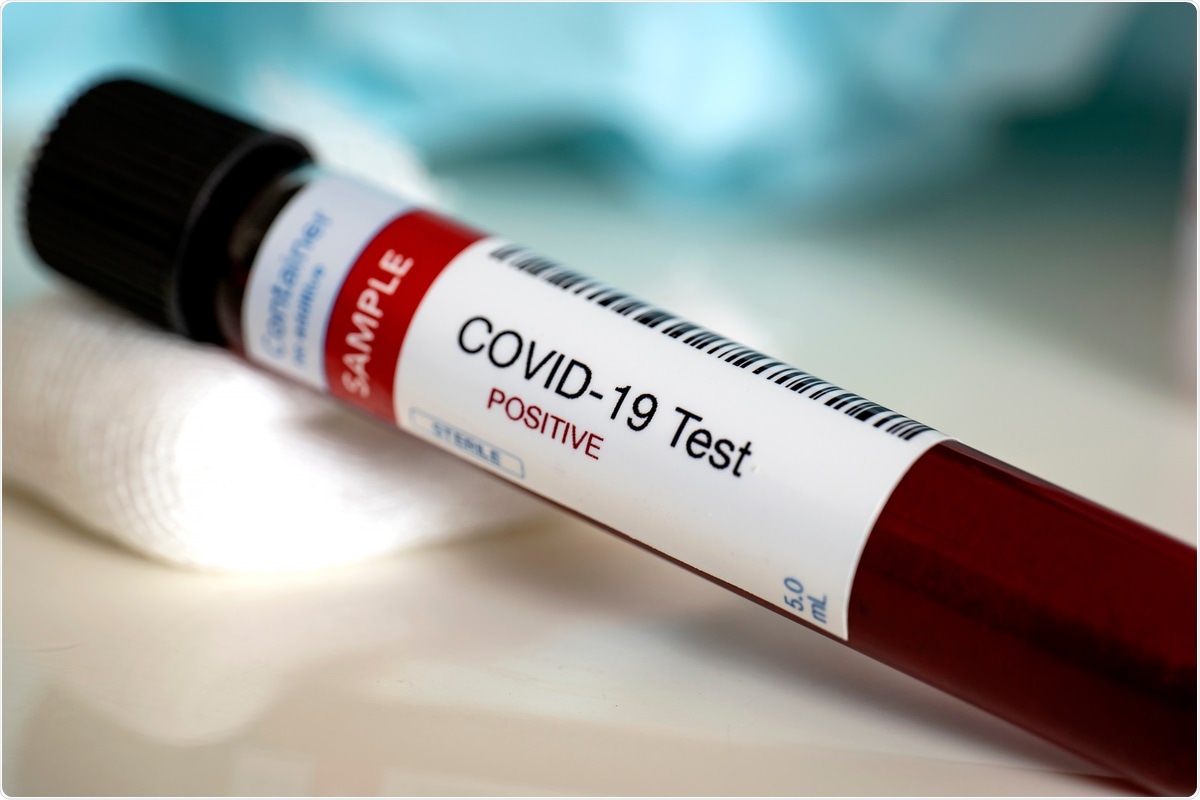 As of March 2, 2022, COVID-19 has claimed over 5.9 million lives and caused over 439 million documented cases of infection worldwide.

There has been significant controversy as to whether SARS-CoV-2 infection confers durable immunity to reinfection with the virus and whether this is comparable to vaccine-induced immunity. This knowledge is crucial to planning public health interventions if cases spike to minimize continuing disruption of daily life while containing viral transmission.

Previously, the same researchers of the current study had suggested a reduced risk of reinfection in seropositive cohorts or those with a positive nucleic acid amplification test (NAAT). In fact, a positive NAAT has associated with one-tenth the risk of reinfection as compared with those who tested negative. Other studies produced similar findings, with both neutralizing antibodies and T-cell immunity showing a strong correlation with reduced rates of infection and reinfection.

The period of protection conferred by SARS-CoV-2 infection was demonstrated to be at least seven months based on real-world data. However, given short follow-up and relatively small study populations with limited geographical extent, the generalizability of such findings is in question.

This led to the current attempt to obtain large-scale real-world data, wherein the researchers monitored individuals who tested positive over time to evaluate the protection offered by seropositivity against reinfection. The current was based on a dataset of over 22 million individuals who were unvaccinated at the time when they were tested positive for SARS-CoV-2 between February 2020 through April 2021.

This retrospective observational study used data from the HealthVerity database covering over 144 million people. All study participants had been tested serologically or using molecular diagnostic tests from February 9, 2020, to December 9, 2020. The researchers assessed the rates of infection among those who had a history of prior infection and compared these findings to those without such a history.

The current study included almost 23 million individuals who had a documented positive result for SARS-CoV-2 infection during the study period. Of these, just over two million were positive for SARS-CoV-2 when tested.

For every thousand people with a documented prior infection with SARS-CoV-2, less than ten people were reinfected over one year of follow-up. In contrast, almost 80 people for every thousand infection-naïve individuals developed infection over the following year. 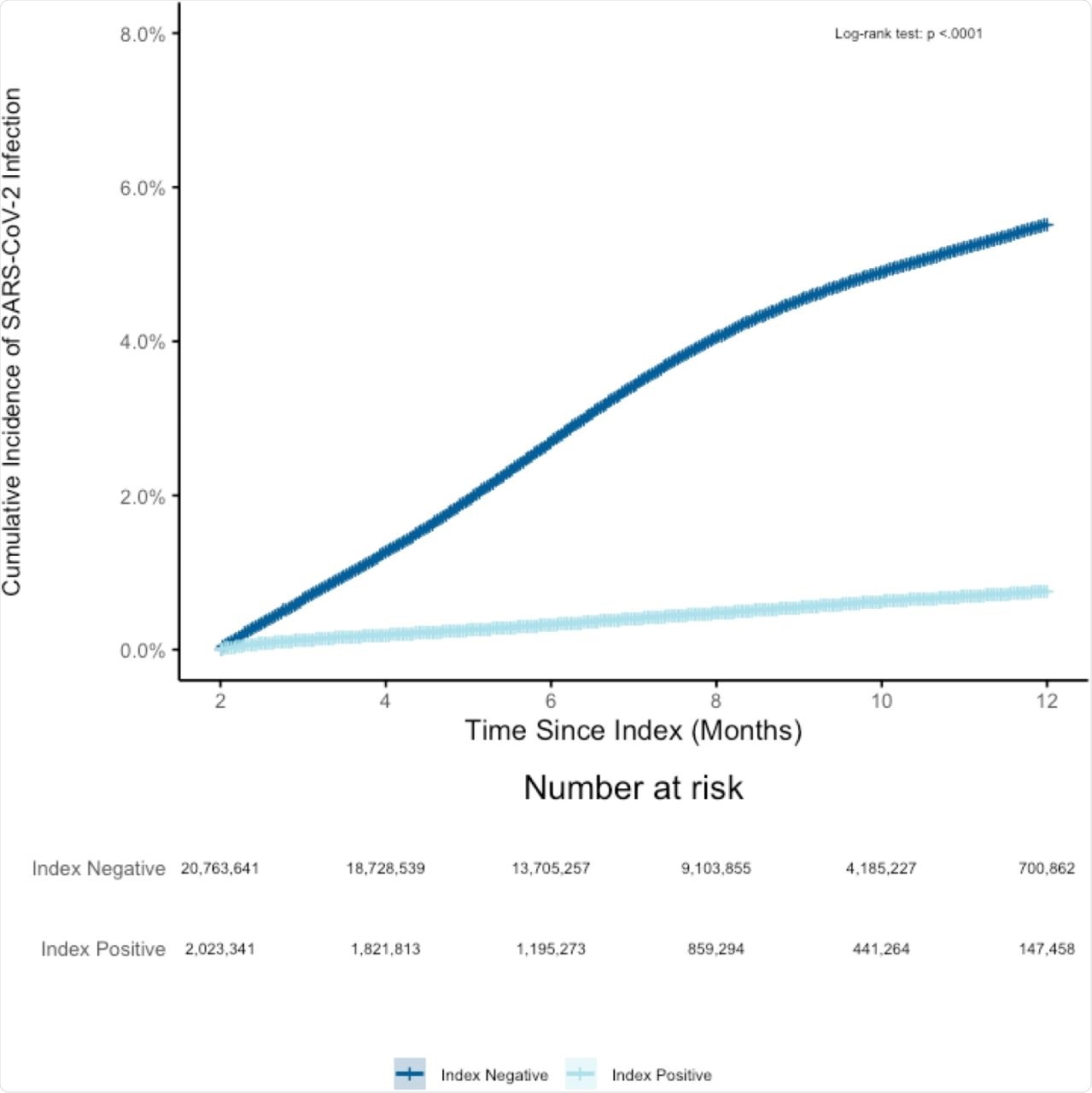 Cumulative incidence of SARS-CoV-2 infection from April 30th, 2020 through April 30th, 2021 among SARS-CoV-2 index positive vs SARS-CoV-2 index negative individuals. There were 71,921 individuals who indexed negative but had a subsequent positive test result within the following 60 days. Of the 27,070,023 index positive and negative individuals, within the first 60 days from index date, 7,501 died in an inpatient setting and 4,275,540 were disenrolled or had no additional claims or EHR activity resulting in 22,786,982 who started follow-up on day 61.

These findings are congruent with earlier studies, indicating an 87% reduction in the risk of reinfection compared to infection among previously infected as compared to uninfected individuals, respectively. Overall, 0.85% of those who tested positive for SARS-CoV-2 developed reinfection during this period, whereas about 6% of infection-naïve individuals were re-infected over the next year.

Over a median of five months of follow-up and up to a year, this degree of protection was found to persist. Protection against reinfection was affected adversely by older age, as those over the age of 85 years or more were at higher risk.

Similarly, the risk was increased in the presence of other underlying medical conditions and in those living in communal care settings such as nursing homes. Conversely, healthcare workers had only half the chance of reinfection.

Taken together, the study findings show that reinfection is rare among those with a documented history of prior infection with SARS-CoV-2. This protection continues to be exhibited for up to a year without obvious waning.

However, the very old, sick, and those residing in nursing homes were found to be more prone to reinfection, unlike healthcare workers who showed a lower risk. This may be due to the increased use of masks, protective equipment, and social distancing by most healthcare workers.

This work adds to our prior findings showing that the real-world use of widely available diagnostics (antibody assays and NAAT) can identify individuals with prior infection and reliably predict long-term risk of reinfection.”

Notably, the current study was conducted when the SARS-CoV-2 Delta variant had not yet become a major threat. Its findings suggest that for earlier variants, prior infection-induced immunity persisted at protective levels for up to a year. Other studies have presented similar findings supporting these results.

medRxiv publishes preliminary scientific reports that are not peer-reviewed and, therefore, should not be regarded as conclusive, guide clinical practice/health-related behavior, or treated as established information.

Dr. Liji Thomas is an OB-GYN, who graduated from the Government Medical College, University of Calicut, Kerala, in 2001. Liji practiced as a full-time consultant in obstetrics/gynecology in a private hospital for a few years following her graduation. She has counseled hundreds of patients facing issues from pregnancy-related problems and infertility, and has been in charge of over 2,000 deliveries, striving always to achieve a normal delivery rather than operative.