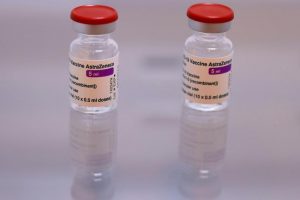 BRUSSELS (Reuters) – The European Union is planning to extend its export authorisation scheme for COVID-19 vaccines to the end of June, two EU sources told Reuters on Thursday, as a shipment of AstraZeneca shots from the EU to Australia was blocked.

FILE PHOTO: Vials of the Oxford-AstraZeneca COVID-19 vaccine is seen in the fridge of a doctor’s office in Gouzeaucourt as part of the coronavirus disease (COVID-19) vaccination campaign in France, February 24, 2021. REUTERS/Pascal Rossignol

Extending controls could reignite tensions with countries who rely on shots made in the EU.

Under the scheme, companies must get an authorisation before exporting COVID-19 shots, and may have export requests denied if they do not respect their supply commitments with the EU.

The mechanism was set up at the end of January as a reaction to vaccine makers’ announcements of delays in the deliveries of COVID-19 vaccines to the bloc.

It is due to expire at the end of March, but the European Commission wants to extend it through June, the two officials said.

“The Commission will propose its extension into June. And that was greeted by the member states with approval, not necessarily enthusiasm, but there is a feeling that we still need that mechanism,” one senior EU diplomat said.

The second official added that at a meeting with EU diplomats on Wednesday, many countries supported the measure, including heavyweights Germany and France.

The EU Commission was not immediately available for a comment.

Italian Prime Minister Mario Draghi has also called for sanctions on companies that do not respect their contractual obligations with the EU.

When the EU’s export control mechanism was introduced in late January it triggered an outcry from importing countries who feared their vaccine supplies might be affected.

On Thursday two separate sources told Reuters the EU blocked a shipment of AstraZeneca’s vaccine destined for Australia after the drug manufacturer failed to meet its EU contract commitments.

The sources said AstraZeneca had requested permission from the Italian government to export some 250,000 doses from its Anagni plant, near Rome.

Australian lawmakers said they were unfazed. Health Minister Greg Hunt said the country had already received its first shipment of the vaccine, which would be enough until a batch being produced domestically by CSL Ltd was completed.

“This is one shipment from one country,” Hunt said in a statement.

“This shipment was not factored into our distribution plan for coming weeks,” he added.

In January, AstraZeneca cut its supplies to the EU in the first quarter to 40 million doses from 90 million foreseen in the contract, and later told EU states it would cut deliveries by another 50% in the second quarter. AstraZeneca later said it was striving to supply missing doses for the second quarter from outside Europe.

Until the decision to bloc the shipment to Australia, the EU had authorised all requests for export since the scheme’s debut on Jan. 30 to Feb. 26, which amounted to 150 requests for millions of shots to 29 countries, including Britain, the United Arab Emirates and Canada, an EU Commission spokeswoman said.

She added, however, that at least one other request was withdrawn by an exporting company. She declined to elaborate.

Export requests mostly concern the Pfizer-BioNTech vaccine which is manufactured in Belgium. AstraZeneca and Moderna shots have also been exported from the EU.

Since Jan. 30 more than 8 million vaccines were shipped from the EU to Britain, a third EU source said.

Britain has so far prevented the export of AstraZeneca vaccines to the EU, using a UK-first clause in its supply contract with the Anglo-Swedish firm, EU officials have said.