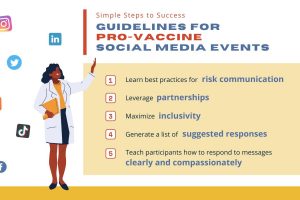 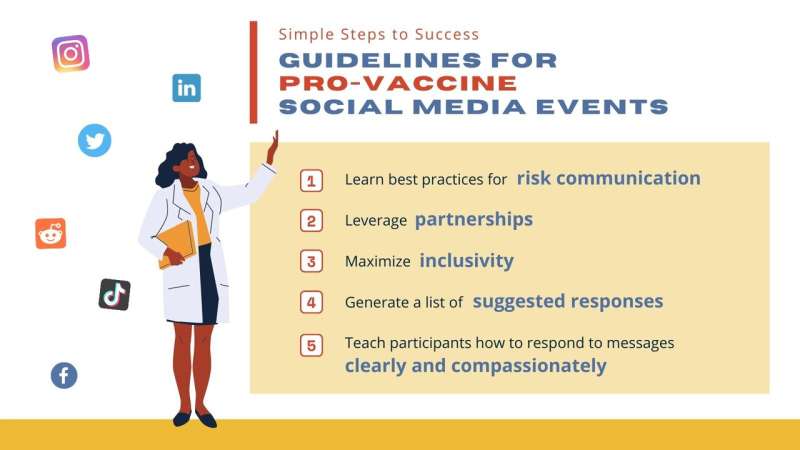 What can vaccine proponents, clinicians and public health communicators learn from “anti-vaxxers?” A lot, according to new guidance for pro-vaccination social media events written by University of Pittsburgh health scientists.

The five-part guidelines, published today in the journal Vaccine, arose from an analysis of a grassroots pro-vaccination campaign organized last year by popular physician and social media personality Zubin Damania, M.D., colloquially known as “ZDoggMD.” Unexpectedly, more than three-quarters of the tweets associated with the event were opposing vaccination, researchers found.

“While at first it felt a little defeating that the event was co-opted to spread anti-vaccination messages, we learned some really constructive lessons,” said lead author Beth Hoffman, M.P.H., a doctoral student at Pitt’s Graduate School of Public Health. “I expect our guidelines will prove valuable now as health professionals work to address COVID-19 vaccine hesitancy and misinformation, as well as in the development of future health communication campaigns to promote vaccines.”

Following two separate instances in November 2019 and January 2020 where vaccination antagonists launched social media attacks, as well as harassed and personally threatened clinicians who had posted positively on social media about vaccination, ZDoggMD called on all health care professionals and vaccine advocates to speak up in support of vaccines using the hashtag #DoctorsSpeakUp on March 5, 2020. The event was supported by Shots Heard Round the World, a project of Public Good Projects (PGP), a public health nonprofit responsible for some of the nation’s most successful health campaigns. Shots Heard was created in 2019 following a coordinated online attack against pediatrics practice Kids Plus Pediatrics.

Hoffman and her team turned to Twitter to collect all publicly available tweets with the #DoctorsSpeakUp hashtag posted on March 5, 2020—a total of 106,275 tweets, of which 19,332 were original.

The team then analyzed a random sampling of original tweets, examining the type of account they came from (organization, health care professional, parent or both), whether they had pro- or anti-vaccine attitudes, and whether the tweet gave a personal narrative or made statements about research or science, or both.

The researchers found that 78.9% of the tweets were anti-vaccine, despite the event being organized as a pro-vaccination campaign. Only 5.4% came from “bots,” or automated accounts, which is lower than previous studies looking at bots that tweet about vaccines.

“The high level of anti-vaccine tweets and the low use of bots suggest this was a highly coordinated response by anti-vaccine antagonists,” said senior author Jaime Sidani, Ph.D., M.P.H., assistant professor of general internal medicine at Pitt. “This was not a coincidental convergence of people with anti-vaccine sentiment, nor was it an attack orchestrated by a few people or organizations deploying bots.”

“Health professionals are highly trusted, but if they’re interacting only inside the four walls of an exam room, then they may not be providing their patients with health information when and where they need it,” said co-author Todd Wolynn, M.D., pediatrician and chief executive officer of Kids Plus Pediatrics and founder of the Shots Heard Round the World project to aid health professionals targeted for their vaccine advocacy.

“True anti-vaccine antagonists are a very small group, but very effective communicators. About 20% of the general population can be described as vaccine hesitant—and many turn to social media with questions,” he said. “It’s critical that clinicians meet these people where they are, on social media, and learn how to use it effectively to counter anti-vaxxers and inoculate the public against misinformation.”