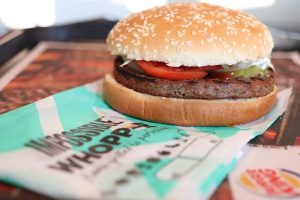 American multinational fast-food chain Burger King rolled out a new plant-based Whopper called the Impossible Burger back in August 2019. They initially tested the new product in selected markets but eventually released them nationwide.

What makes this burger stand out from Burger King’s menu of guilty pleasures is that it is completely plant-based. What gives it a meaty flavor is an ingredient called heme, which comes from soy plants.

Testings first started in early 2019 at St. Louis. The fast-food company then revealed their intention to included additional markets so that they could start with nationwide distribution by the end of that year. Burger King told USA Today that the test results were encouraging. They also revealed that they had received a lot of good feedback from both plant-eaters and meat lovers about the product. Deutschlandreform/Shutterstock | Burger King rolled out the Impossible Whopper in August 2019.

The Impossible Whopper was first developed by Impossible Foods, a Silicon Valley-based company that specializes in developing plant-based alternatives to meat products. Among the ingredients of the burger are several oils like coconut and sunflower oil, soy protein concentrate, and a variety of additives.

When you factor in the other components of the burger sandwich like the tomatoes, mayo, ketchup, lettuce, pickles, white onions, and sesame seed buns, its nutrient facts would bump up a couple of grams higher. A full sandwich has 630 calories, 34 grams of fat, 11 grams of saturated fat, 1,080 milligrams of sodium, 58 grams of carbohydrates, 3 grams fiber, and 19 grams of protein. NTL Photography/Shutterstock | The Impossible Whopper is a plant-based burger.

Nutritionists are all in favor of having a plant-based menu option. Keri Gans, RDN, who authored the book titled The Small Change, even applauded Burger King for the move as more and more consumers have been trying to go plant-based.

The big question, however, is if the Impossible Whopper is healthy. It depends on what you are comparing it with. If you put the plant-based burger alongside other options on Burger King’s menu, then it can be considered “healthy”. It’s one of the healthier burger options, according to Gans. However, she also noted the high levels of saturated fats. Although it’s significantly less the regular Whopper, it’s still a high level.

According to Beth Warren, RDN, the burger’s main ingredient is a highly processed and highly refined form of soybean. Like many processed foods, the Impossible Whopper is also high in sodium. Tada Images/Shutterstock | Make your Impossible Whopper meal a little bit healthier by choosing a salad over fries and water over soda.

When you order an Impossible Burger (or any other burger for that matter), you usually get fries and soda. That makes it unhealthy. A medium-sized serving of fries already has 380 calories and 17 grams of fat, while 12 ounces of Coke has 140 calories and 39 grams of sugar.

What is the CICO diet and is it healthy?

The fitness industry is overwhelmingly white – and that needs to change
Burger, fresh, Grill, healthy, Impossible, Is, King’s, off, plant-based, the, Whopper’
Latest Posts