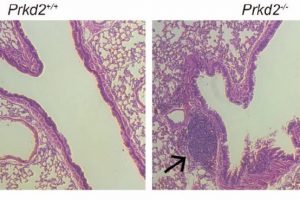 A team of researchers at the University of Texas Southwestern Medical Center has identified the gene responsible for controlling the activity of T follicular helper (TFH) cells. In their paper published in the journal Science Immunology, the group describes their study of the gene Prkd2 and what they learned about its role in autoimmune diseases.

Prior research has shown that erratic behavior of TFH cells (specialized T cells) can lead to problems with immune responses, which in turn can lead to autoimmune diseases. This is because TFH cells help B cells produce antibodies. In this new effort, the researchers identified the gene responsible for producing the enzyme that controls TFH activity— Prkd2.

Suspecting that Prkd2 plays a role in the development of autoimmune diseases, the researchers conducted a genetic screen with ENU-mutagenized mice. They found that those with Prkd2 gene mutations developed hypergammaglobulinemia. They next found that that a certain loss-of-function mutation reduced production of Prkd2W807R enzymes that controlled TFH cell behavior. Without the controlling enzyme, TFH cell centers developed excessive germinal centers (the parts of the cells that are used to help B cells), resulting in increased B cell activity. And that led to an increase in production of IgE antibodies—a symptom commonly seen in people with autoimmune diseases. The researchers also found that introducing a protein called Bcl6 (a known gene expression repressor) directly into T cells of mice that had the loss-of-function mutations also triggered excessive TFH development. And they found that if they immunized the mice, Bcl6 tended to repress expression by Prkd2 in TFH cells pushing them to mature faster.

Caring for mates, not number of beers, is responsible drinking

New parents are taught to feed. But sleep is just as vital, for both of you
activity, cells, controlling, follicular, for, gene, identified, of, responsible, T
Latest Posts