Home » Health News » Heart attack: A type of meal could increase the risk of having a heart attack ‘fourfold’

Heart attack: A type of meal could increase the risk of having a heart attack ‘fourfold’ 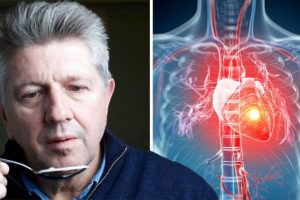 What's the difference between a heart attack and cardiac arrest?

Heart attacks refer to the damage of the heart muscle resulting from blocked blood supply to the area. When an event strikes, it is usually characterised by chest pain, shortness of breath and lightheadedness. The condition is largely understood as a consequence of lifelong damage to vascular health. According to one body of research, however, eating a heavy meal may also significantly heighten the risk of a heart attack, within just hours of consumption.

According to the NHS: “A heart attack is a serious medical emergency in which the supply of blood to the heart is suddenly blocked, usually by a blood clot.”

The health body explains that about 80 percent of heart attacks and strokes in people under 75 could be prevented.

Part of the drive to lower rates of the disease has involved encouraging healthier dietary choices.

But although the cumulative effect of poor dietary choices on the heart is significant, consuming large amounts of fat in one sitting may suffice to trigger an event too.

READ MORE: Painkillers: Two drugs that ‘increase the odds’ of internal bleeding by 75% when combined

In fact, the findings of one early study suggested that eating a heavy meal could increase the risk of heart attack by about four times within two hours of consumption.

Overeating occurs when you eat beyond the point of feeling full, causing the body to work overtime in order to support the digestive system.

One early body research presented at the American Heart Association’s Scientific Sessions in 2000 suggested the risk of heart attack increased fourfold after eating a heavy meal.

For their study, the researchers questioned 1,986 male and female patients about the meals they’d consumed prior to their heart attack.

Of these, 158 had consumed a self-described heavy meal within 26 hours beforehand, and 25 had eaten a big meal during a two-hour “hazard period” preceding the events.

The finding appeared to suggest that heavy meals could act as a trigger, much in the same way as extreme physical exertion or an outburst of anger might.

The lead authors of the study, Francisco Lopez-Jimenez, a cardiology fellow at Brigham and Women’s Hospital in Boston, pointed out that there is a distinct difference between the risk factors that develop over a lifetime and those that act as a sudden trigger for a heart attack.

Both, however, are potentially dangerous, pointed out the researcher.

The researchers highlighted several ways in which heavy meals could adversely affect the heart.

They speculated that high-fat meals could impair the function of the endothelium, which is the inner lining of the arteries.

During digestion, food releases hormones into the bloodstream, which requires significant amounts of energy and places additional pressure on the heart.

The health body Northwestern Medicine explained that in addition to contributing to higher cholesterol levels, heavy meals may increase your risk of heart attack by affecting blood pressure.

The health body noted that a change in blood flow and increases in heart rate and blood pressure following a heavy meal place a lot of pressure on the heart.

Eating a heavy meal can also cause a sharp spike in insulin, which affects the lining of vessels leading to the heart.

The most logical approach to averting the risk of an event is treating all predisposing risk factors, such as high cholesterol and high blood pressure.