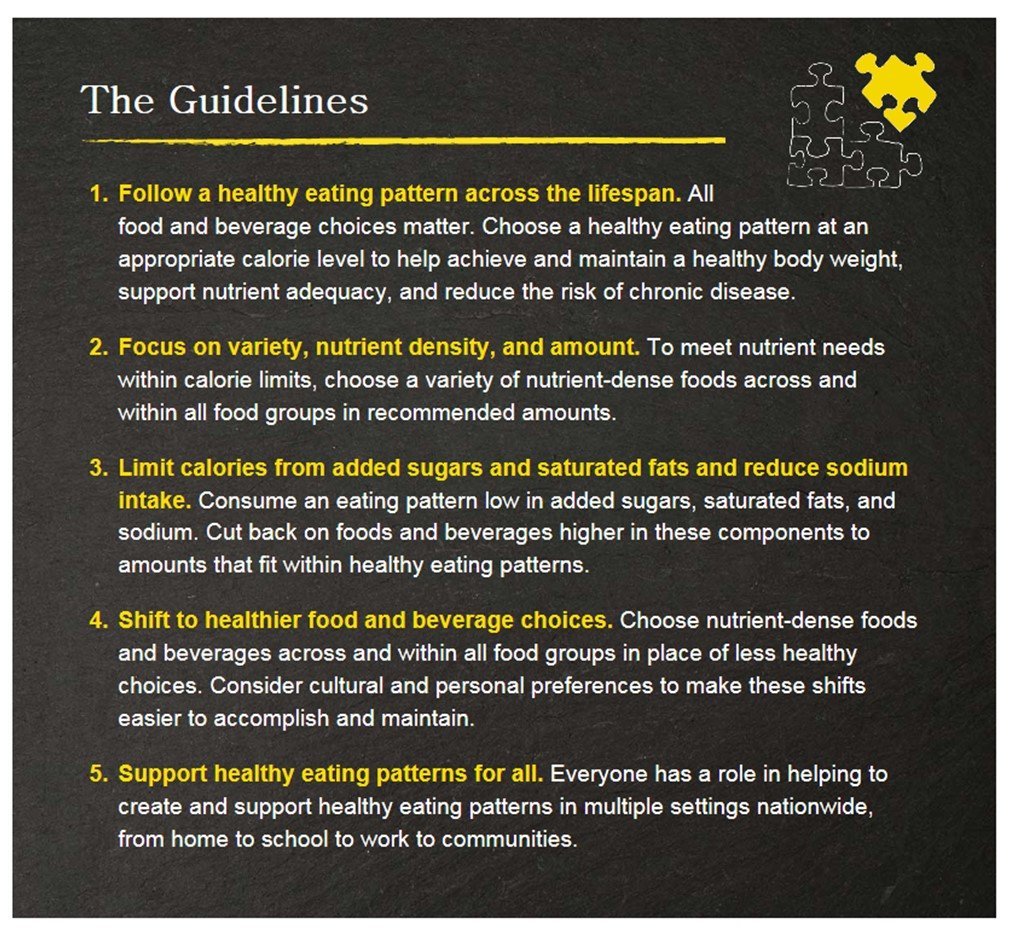 Dietary risk factors are among the key contributors to mortality and morbidity in the United States and globally, and there is increasing emphasis on understanding the influence of total diet quality and overall dietary patterns rather than single aspects of what we eat and drink. In order to evaluate the quality of what people eat and drink, researchers often rely on recommendations such as the Dietary Guidelines for Americans (DGA). In the latest issue of the Journal of the Academy of Nutrition and Dietetics, leading nutrition experts describe and evaluate the latest version of the Healthy Eating Index (HEI), which has been issued to correspond to the 2015-2020 Dietary Guidelines for Americans.

The DGA are updated every five years, leading to changes in emphasis and quantification, as the evidence on healthy eating evolves over time. Likewise, a new HEI is issued to correspond to each new edition of the DGA and to reflect these changes. The HEI is a measure of diet quality, independent of quantity, that can be used at various levels of the food stream, including the national food supply, the community food environment (e.g., foods available at a school or a fast food menu), and food intakes among the population.

The HEI score can be used to evaluate how healthy the American diet is in relation to federal dietary guidance. It has been applied by researchers to describe diet quality among the US population, as well as population subgroups such as Mexican Americans, children, and cancer survivors. It has also been used to evaluate the quality of food offerings across the food stream, including the US food supply, restaurant menus, grocery store circulars, and Federal food distribution programs.

“Tracking quality at these different levels is critical since we are increasingly recognizing the power of the food environment on eating behavior. That is, individuals cannot be expected to make healthy choices if those options are not readily available in the home, at work, at school, and in the community,” comments Jill Reedy, Ph.D., MPH, RD, Program Director at the Risk Factor Assessment Branch, Epidemiology and Genomics Research Program, Division of Cancer Control and Population Sciences, National Cancer Institute, National Institutes of Health, Bethesda, MD, USA, and co-author of the papers in this issue.

The latest HEI was developed through a collaboration between researchers at the National Cancer Institute (NCI) and the United States Department of Agriculture’s (USDA) Center for Nutrition Policy and Promotion (CNPP). A trio of papers in this special issue introduce the new HEI and describe differences compared to the 2010 and 2005 editions, evaluate the properties of the HEI-2015 for assessing dietary quality, and discuss its applications. 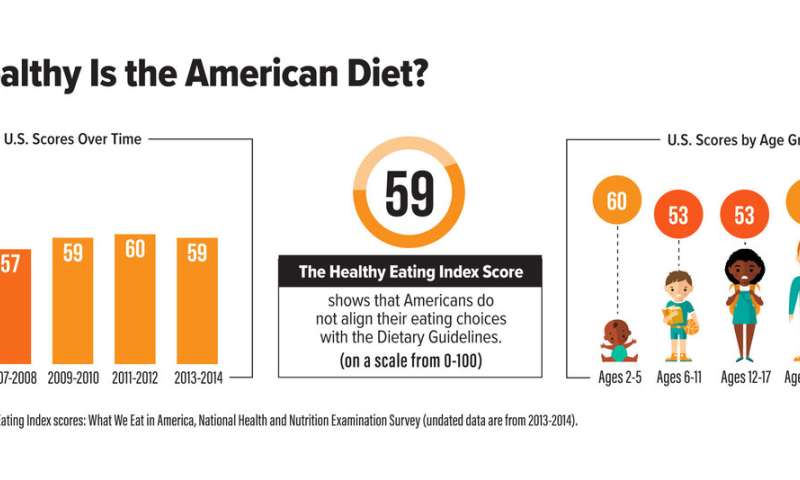 The first paper outlines the steps taken to update the most recent version of the HEI and prepare an HEI-2015 scoring system to reflect compliance with the 2015-2020 DGA food and nutrient recommendations. “The Dietary Guidelines for Americans evolve incrementally over time based on scientific evidence, and updates to the HEI are designed to capture that evolution,” explains Susan M. Krebs-Smith, Ph.D., MPH, Risk Factor Assessment Branch, Epidemiology and Genomics Research Program, Division of Cancer Control and Population Sciences, National Cancer Institute, National Institutes of Health, Bethesda MD, USA.

The 2015 edition has 13 components, each reflecting an important aspect of diet quality as per the DGA. Dr. Krebs-Smith and colleagues describe each of the HEI-2015’s constituent food and nutrient categories, as well as its 100-point scoring system, including referent standards for each component of the total score. Since the 2005 version, the HEI has been based on densities (e.g., amounts per 1000 kcal), rather than absolute amounts, and relies on a common set of standards that are applicable across individuals and settings. Notable differences compared to the previous edition are that saturated fat and added sugars are each separately tracked, and excessive alcohol contribution to energy is not captured separately. This new version also incorporates modifications to the scoring procedures for legumes.

In the second paper, Jill Reedy, Ph.D., MPH, RD, and colleagues report on testing of the index’s validity and reliability. Known high-quality sample menus from a variety of organizations such as the National Heart, Lung, and Blood Institute (Dietary Approaches to Stop Hypertension [DASH] diet), US Department of Agriculture (USDA), Harvard Medical School (Healthy Eating Guide), and the American Heart Association (AHA) (No-Fad Diet) were scored using the HEI standards. These menus all achieved high scores, ranging from 88 to 100 points.

At the next level of testing, data from the Centers for Disease Control and Prevention’s National Health and Nutrition Examination Survey (NHANES) were used to compare HEI-2015 scores across population subgroups to examine if meaningful differences could be detected. Average HEI-2015 scores and ranges demonstrated reasonable variation across the subgroups examined, including groups differentiated by age, gender, and smoking status. Results suggested that the index reflects the many dimensions of dietary guidance. As a final assessment, datasets from the NIH-AARP Diet and Health Study were examined and showed that individuals in the highest quintiles of HEI-2015 scores had a 13-23 percent decreased risk of all-cause, cancer, and cardiovascular disease mortality.

“These analyses demonstrated evidence supportive of validity and reliability for the HEI-2015, as has been shown in earlier work with the HEI-2005 and HEI-2010,” notes Dr. Reedy. “However, limitations in the HEI as well as those inherent to dietary intake data more broadly should be considered in any application of the index.”

The focus of this paper is on the use of the HEI for cases in which dietary intake data are available for characterizing diet quality for groups of individuals sampled from the population. Further development of methods for calculating the HEI for individuals will help advance our knowledge on diet quality. “The use of the most appropriate approach to calculating HEI scores for a given purpose can help build a stronger literature on the influence of dietary quality on health and disease risk, helping to inform future policies and programs to support health,” comments Dr. Kirkpatrick.

In an accompanying editorial, Barbara Millen, DrPH, MPH, RD, FADA, Millennium Prevention, Inc., and Boston Nutrition Foundation, Inc., Westwood, MA, USA, and Chairman of the 2015 Dietary Guidelines Advisory Committee, points out the growing use of web and mobile platforms and apps in clinical and community settings for purposes such as diet and exercise behavior monitoring. She forecasts a bright future for integrating new methods of nutritional risk assessment, such as the HEI-2015, with advanced analytics and innovative web and mobile technologies.

This Is The Healthiest Food On The Planet
American, answer, determine, diet, eating, healthy, helps, How, Index, Is, the
Latest Posts