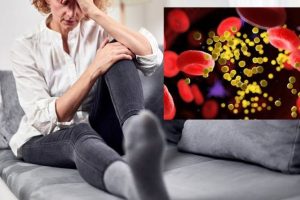 Dr Sarah Jarvis MBE, is a GP who spoke on behalf of HEART UK, the UK’s only cholesterol charity. She explained that FH is in fact relatively common, with one in 250 people in the UK having inherited the condition. One of those people is Hazel Gallagher, whose family has been dominated with the condition. Speaking exclusively to Express.co.uk, Hazel explained that not only her but a whopping five generations of her family have all been diagnosed with FH. Even more interestingly, her mother, grandmother and her all shared the same physical symptom, that doctors are still baffled by today.

Hazel told Exress.co.uk: “My mother’s brother, he died at the age of 40 and left four very young boys, and they all developed heart disease in their 30s.

“I was told quite bluntly that I would probably die young like my uncle, or have heart attacks like my cousins, who were in their 30s and 40s. The [doctors] were quite blunt about it.

“I did sort of have the feeling of ‘oh, why me?’ kind of thing, James [Hazel’s son] was a young baby, I remember pushing him along in his pram and thinking, ‘Gosh, am I going to be alive to see him get married’.

Being diagnosed with FH over 30 years ago, Hazel admits that although it was a “shock” at first, she now see’s being diagnosed as a blessing, and lives her life fuller as a result.

“When I was diagnosed I had to give up sport, but now they encourage you to do sport. So I think people are fitter once they get diagnosed. There is nothing to be afraid of, I think you should be more afraid if you don’t know.

“The best thing that happened was that they found it and I have lived a completely healthy full life, I think a fuller life; my children, because they are diagnosed, they are living a full life and my grandchildren will do so as well.”

HEART UK, add that FH can cause problems with the “natural processes” in the body, especially in regards to LDL cholesterol [bad cholesterol].

However, in those with FH, the liver cells can’t take LDL out of your blood, which is all caused by specific genes. These genes include:

During the interview with Hazel, she interrupts her own train of thought, in response to answering if there are any signs or symptoms of FH. She says: “Oh, yeah, I’ve got one. Now, I’m still educating professionals with my tendons.”

Here Hazel is referring to her achilles tendon in particular, which can sometimes develop lumps, known as tendon xanthoma, as a result of FH. These lumps of cholesterol cause tendons to swell, and can also occur on your knuckles or knees.

“Going back to when I was diagnosed, it was through my tendons that I got diagnosed,” Hazel adds. “I went back to my GP and told him what it was, because I was always told it was rheumatism [a disease that affects the joints and tendons].”

“And then he [the GP] went and got his other doctors to come in. Then my consultant from Bath used to take me to the hospital when doctors were having their lipid exams and they used to look at my achilles tendon or my knuckles or my hand and guess what was wrong with me.

“People such as reflexologists, who look at people’s feet should know about this. If they know that people have got a thickening of the achilles tendon they should say to them, ‘Go and talk to your GP. Have you done a cholesterol test?’

“They need to ask the questions ‘Has your mother got it?, Has anybody died?’ That’s how I was diagnosed.”

Despite her own personal experience, Hazel does admit that her diagnosis was over 30 years ago, and accepts that modern medical professionals are far more aware of the physical warning signs of FH, as well as increased lipid and blood testing for high cholesterol.

Dr. Philip Ades, a cardiologist at the University of Vermont College of Medicine, told the American Heart Association: “As a clinician, if I see a patient with a very thickened Achilles tendon or xanthomas, I’ll tell myself, ‘If they’re depositing cholesterol in their tendons, it’s very likely they’re depositing lipids elsewhere, such as in their coronary arteries’.”

In addition, as well as the thickening of the achilles tendon, other physical signs that indicate FH include:
Xanthelasmas: Small lumps of cholesterol near the inner corner of your eye, usually yellow in colour.
Corneal arcus: A pale white ring around the iris – the coloured part of the eye. If individuals over 50 have corneal arcus it is a strong sign of FH.

Although FH cannot be cured, the condition can be treated, significantly reducing the risk of heart disease, heart attack or stroke. For many people, lifestyle changes on their own are not enough to bring their high cholesterol down and they have to rely on medication like statins.

Statins are often very effective and work by slowing down the production of LDL-cholesterol in the liver, where it is made. They do this by blocking a specific type of enzyme. As well as lowering your LDL-cholesterol, statins can lower your triglycerides too, and high triglycerides are linked to liver disease, heart disease and diabetes.