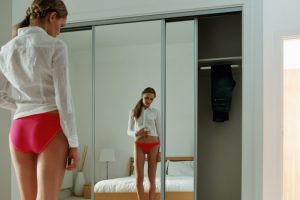 They say beauty is in the eye of the beholder. But for those with body dysmorphic disorder (BDD), what they see in the mirror is not pleasing.

Dr Ben Buchanan knows this well. The Foundation Psychology Victoria psychologist says BDD is a mental disorder characterised by an “obsessive preoccupation with appearance, where individuals might think they look ugly or disfigured in some way, even though they look normal”. 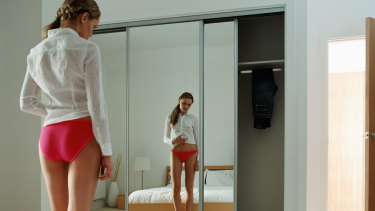 But many people dislike – or even hate – certain parts of their body. Buchanan says one of the differences between “normal” body dissatisfaction and BDD relates to whether someone’s preoccupation with their appearance interferes with their life. “That’s the key,” he says. “If [preoccupations] get in the way of school, work or social life, then it might be a clinical problem.”

Michelle (not her real name) can identify. She developed adult-onset acne at age 21. Soon, thoughts about her skin began dominating her life, causing her to retreat from social events and even university, where she was undertaking a science degree.

“I couldn’t make it to a lot of my lectures because I was worried that people would be looking at my skin and thinking how disgusting my skin was, and how ugly I was,” she says.

At first, Michelle took six months off from her degree. Eventually, she stopped leaving her house altogether. During that time, Michelle spent hours checking her skin in the mirror.

That ritualistic checking is part of the disorder, says Buchanan, who adds that people with BDD can also develop repetitive behaviours such as reapplying make-up, or touching the area of concern over and over again.

Another ritual Michelle engaged in was to seek reassurance. But it never helped, she says, as she couldn’t believe people when they told her that her skin wasn’t as bad as she thought it was.

Buchanan says BDD affects 1 to 2 per cent of the population, making it more common than either anorexia nervosa or schizophrenia. And it often goes undiagnosed because people with BDD can’t recognise that their thoughts are the problem. “Because the nature of the disorder itself is a belief you’ve got a physical problem, most people go years before they think, ‘Oh, maybe it’s an actual psychological problem.’”

Then there are those who are so “ashamed” of how they look, they can’t talk about it. Meanwhile, others dismiss their feelings as “being vain”.

For some people, that devastation means always staying home, terrified to go out because they can’t bear the shame of how they look. For Michelle, despair about her skin resulted in a suicide attempt at age 24. It wasn’t until Michelle’s mother happened to hear about the condition on TV that she steered Michelle towards a psychiatrist, catapulting her on the path to better mental health.

Buchanan says recognising you may have a psychological disorder rather than a physical one is “a huge step”. The next step is seeking treatment. But before pursuing psychological treatment, it’s common for people with BDD to find themselves at a cosmetic surgeon, looking to “correct” their physical issue instead.

Sadly, Buchanan says 83 per cent of people with BDD who undergo cosmetic surgery are dissatisfied with the results, and experience a worsening in BDD symptoms. Instead, he says, they should seek an evidence-based treatment such as cognitive behavioural therapy, which involves “unpacking the destructive thinking and behavioural cycles”, and/or antidepressants.

Now 40, Michelle is on medication, seeing a psychologist and psychiatrist, and feeling well. Her advice for people whose loved ones have BDD is simple: you don’t have to view the appearance of someone with BDD the same way they do. Rather, acknowledge that having BDD “greatly affects” them. She also wants those struggling with the disorder to know there’s hope. “If you get the right help, you can manage it.”

This article appears in Sunday Life magazine within the Sun-Herald and the Sunday Age on sale October 20.