Home » Health News » Like Vanessa Bryant, I lost my daughter suddenly. These are the 6 things to never say to a grieving parent and 3 things that could help. 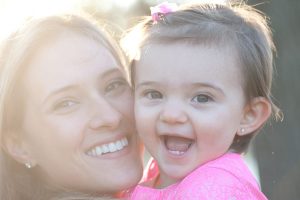 As the tributes for Kobe and Gianna Bryant poured in during a public memorial in Los Angeles on Monday, my heart broke again for their wife and mother, Vanessa. I wished that I could cut through the noise, and tell well-meaning family, friends, fans and media that many of them were likely to say all the wrong things and add insult to a grieving mother's already unfathomable pain.

I know because I had experienced it firsthand.

On July 25, 2013, I was still a young, naïve, and carefree mom, returning home to Boston on a red eye from a short work trip in San Diego. Before I boarded, I called to check in with my mother who had been watching Emmy, my then 21-month old daughter, and told her about the toys I had bought for her at the airport.

When I stepped off the plane, I immediately saw several police officers shuffling around at the gate. I remember thinking: "Are they arresting someone on our plane?"

But then I saw a chaplain and my mother.

I collapsed on the floor screaming, "Where is Emmy?"

Emmy had had two febrile seizures in her life, and we eventually uncovered that she'd died in her sleep from a condition called sudden unexpected death in epilepsy or SUDEP.

I don't want to minimize the overwhelming outpouring of love and support we received from so many friends, family and strangers. I truly believe that no one wants to hurt a bereaved parent, but you don't know what you don't know.

So I'm here to tell you six things not to say to a bereaved parent, and three things you can do to help.

Don't ask "How are you doing?"

When someone has experienced something traumatic and life altering, asking them: "How are you?" can make them want to explode. After my daughter died, this question always made me feel like screaming: "My daughter died and I don't know how I'll learn to live with this pain."

Acknowledging pain, but letting them choose how much to share with you is a better approach.

Don't praise a grieving parent about how they're handling the tragedy

Don't praise a bereaved parent for how they're handling the loss.

Suggesting that I am strong and that you'd somehow fall apart more than I am makes me feel like you are questioning how deeply I love my child. It's hard for people who haven't lost a child to understand how a bereaved parent could get out of bed, smile again, and go on living. What I've come to learn is that at some point, we will all experience trauma, loss, or tragedy. It's just part of life. And when life inevitably throws s–t at you, you have no choice but to deal with it the best you can.

I know when people said "She's in a better place" or "It was her time," they were only trying to help. They wanted to fix it. But it only makes a bereaved parent angry because this isn't something you can fix.

Every time someone said "God needed another rose for his garden," I remember thinking, you wouldn't be saying this if God had deemed your child "special enough for his garden" or if it was your child's "time." Bereaved parents will form their own beliefs about the loss of their child, so don't try to impose your own beliefs on us.

Saying anything that begins with "at least" — including "At least she wasn't in pain" or "At least you can have more children" — minimizes a grieving parent's suffering. People have a tendency to look for the silver lining in a child's death, hoping it will somehow make the bereaved parents feel better. But losing a child isn't something you can make better.

Take a moment to really let this sink in: It is OK for us to not be OK. Our children died. We want to grieve them, miss them, and love them forever. Bereaved parents have accepted that we will never be the same and you should too.

It is true that, with time, many of us have changed in positive ways because of our loss —  taking nothing for granted, and experiencing deeper joy and empathy. But we'd give it all back to have our children with us, and these gifts don't somehow make us accept their death. It's a delicate distinction best left to the bereaved parent to work through. Let the bereaved parents tell you how their child's life and loss has changed them.

Don't ask about how the child died

After losing a child, you learn that many people have an intense need to maintain the illusion that bad things happen to other people. They will thus say things motivated by the need to assure themselves that your child died because of something unique to your child, his or her situation or your parenting. Asking a newly grieving parent how their child died can feel like you are trying to assign blame. Instead, ask about the child's life.

Note that if a bereaved parent openly discusses what happened or becomes an advocate related to their child's manner of death (as I have for SUDEP), feel free to ask about their death if, and only if, your motives are truly to learn, advocate and help others.

I personally am honored that in Emmy's memory, I can help prevent seizure-related deaths by educating others and fundraising for seizure monitoring devices. However, I immediately know when someone's motives are simply to assign blame or morbid curiosity. Make sure you're coming from the right place.

Don't tell the parent to "move on"

A bereaved parent will never "move on." We will learn to move forward, one foot in front of the other, with our child in our hearts every single step of the way. Our children deserve for us to miss them, grieve them, and carry them with us. Anything that implies otherwise only tries to take from us more than we have already lost.

To help a grieving parent, talk about the child who died and help out with basic everyday tasks.

Most grieving parents want to know that their child is remembered, loved and missed. Just because my daughter died doesn't mean I am no longer her mother. I want to remember Emmy, honor her and speak about her probably even more than you do your living child. Say my daughter's name, share with me your memories of her, or ask me to tell you about her.

Elizabeth Edwards, whose teenage son died from cancer, encourages people to speak about children who have died because "what you're reminding them of," she said, "is that you remember that they lived and that's a great, great gift."

Show up for your friends and family

In the immediate term, there are logistics that most parents haven't planned for – buying a burial plot, planning a funeral, transporting a body, saving money to fund the funeral. If you are a religious advisor, close friend or family member, help in any way you can so that the parents can simply grieve (unless, of course, the parents want to handle the logistics themselves).

I told my family I wanted three plots purchased for Emmy, myself and my husband, and to this day, I don't know who took care of coordinating all the details, but I'm grateful that someone did.

In the early months, show up in ways without the pressure of a response or thank you. One of the most helpful things someone did for me after my daughter died was send me periodic texts saying "No need to respond, just want you to know that I'm thinking of you and Emmy."

She did this for months and continues to send me a text on the anniversary of Emmy's death every year. It helped me feel less alone and grateful that someone still thinks of my daughter.

Other helpful things you can do: Offer a hug and sit with them as they cry to let them know they are not suffering alone; drop off food; share resources for bereaved parents — local support groups, online groups;  fundraise for financial help (if needed); do laundry; shop for groceries.

If you're at a loss, ask their closest family members what they think would be most helpful.

Acknowledge their pain and the reality of child loss

My husband and I half-joke all the time that our life motto is "s–t" happens." But it's true.

As much as we try to control and predict life, a lot of bad things happen. Acknowledging that will go a long way towards comforting a bereaved parent.

Last year, one of my husband's employees unexpectedly lost a relative. When my husband heard the news, he said: "That really sucks. Take as much time as you need." She later told my husband that he was the only person who'd said something appropriate after her relative's death.

If you've never lost someone, especially a child, saying something simple like "this blows" or "life really sucks sometimes" can seem to fall short. People always rush to fix it (which you can't) with platitudes and silver linings, but trust me on this, a simple, honest acknowledgment is best.

For Down Syndrome Adults, Death and Dementia Often Come Together