Home » Health News » “Listening to my voice was excruciating“: we talk to women about coming to accept how they sound

“Listening to my voice was excruciating“: we talk to women about coming to accept how they sound 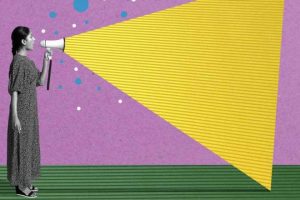 Is it strange to not like the sound of your own voice? We speak to those who struggle with their own sound, and an expert about how you can become more confident with your voice.

I’ve just broken up for the six-week summer holiday and I’m sitting in my house with my best friend, surrounded by Barry M mascara, an assortment of different lipsticks and two glasses of orange juice.

At the height of boredom, we’d filmed a ‘What’s in our make-up bag?’ video on my iPhone 4. For some reason, we were pretending to be YouTubers.

“Aghhh, I hate hearing my voice. Why do I sound like that?”14-year-old me says, listening back to the video.

Like many other teenage girls, I did not like hearing my own voice. In fact, I didn’t like hearing my voice up until only recently. It was higher, squeakier and weirder than how I imagined it to sound in my head.

But over the past year, I’ve been sending more voice notes, as it’s such an effortless way of connecting with my friends. I’d listen to my own voice notes back, and it was then that I grew to love my voice. “I don’t actually sound that bad,” I’d think.

For many people, hearing the sound of their own voice can be uncomfortable. The reason for this is believed to be because when we hear our own voice as we speak, a lot of the sound is internally conducted through the bones of our skull. It’s this internal bone conduction that boosts the lower frequencies, making our voices sound lower to us, through our skulls.

But for women, is the issue as simple as physiology? How does hating the sound of our voices affect us socially and psychologically? Women are in toxic relationships with their voices, forced into changing them or not speaking as much, worried about how they’ll be perceived.

Take Paris Hilton and musicians like Britney Spears, who both went years using fake baby-like voices to sound more appealing. On the other side, studies have shown that some women lower the pitch of their voice in the workplace as a way to compete with men and sound more authoritative. Either way, many of us feel that we can’t be authentically ourselves and speak in our natural tone. And that, sadly, is the problem.

24-year-old Ana* used to find the idea of listening to her voice “excruciating”. She also had a lisp growing up, which she eventually took lessons for and is now mostly inaudible. “I feel like I’m not authoritative enough,” she tells Stylist over the phone. “My voice isn’t necessarily high but I feel like women with a slightly deeper voice… you can take them a bit more seriously.”

“Up until a few years ago, the idea of listening to my voice was absolutely excruciating. I used to be a journalist and having to listen back to interviews was the most painful thing. It actually used to upset me a bit,” she continues.

But now, Ana is much more comfortable with the sound of her voice. It was a newfound love for voice notes that helped her overcome her insecurity.

“During lockdown, I started to use voice notes a bit more and it just kind of helped me detach myself and my insecurities from my own thoughts – and focus more on human connection,” she explains.

It is possible to learn to love your voice

Like Ana, 28-year-old Martha grew to love her voice when she was 24 or 25, and started listening back to voice notes she’d sent to friends. “Suddenly the hoarseness started to sound soulful, rather than apprehensive,” she tells me. “And the high-pitched whiny tone that I used to hate, I now understand to be how I express excitement.”

“I remember when I was in school, video phones had just started to become mainstream, and someone replayed a video where I had asked, ‘Are you videoing me?’ I can still remember how cringe that question sounded coming out of my mouth. Even now I shudder as I think about that moment.”

For a lot of us, insecurities about our voice can hold us back in our work and career. “I know that in comparison to some people, I do have a lower resonance. So I was always just kind of conscious about sounding too masculine,” says 26-year-old presenter and host Anna Marie.

“I thought [a deeper voice] was unattractive because when I’m watching other presenters on TV, it’s usually up here (she shows me what she means by speaking in a higher tone) and they speak with a certain rhythm and melody. I really wanted to imitate that. But I just knew I didn’t sound like that.”

Though British born, she explains that her St Lucian background means that she might pronounce “certain words differently”, something she was self-conscious about. “I’m also from Hackney in east London. And I’ve never felt like I’ve sounded like other people. People from Hackney speak a certain way.”

Anna Marie began to get caught up in listening to TV presenters she admired, like Holly Willoughby. “I felt like in order to be engaging or more attractive, I needed to speak in a higher tone,” she said.  She would watch This Morning, the news and American talk show hosts so that she could practise speaking like them. “I was also on YouTube doing singing lessons, or any kind of vocal training I could find – and would actively practice speaking in a higher resonance.”

Anna Marie also adds that Black women like her tend to have more bass in their voices, and that she wished there were more people who look and sound like her on TV.

She only began to fall in love with her voice a couple of years ago, and attributes that to hosting a weekly radio show and having to hear her voice more often. “People listen in and the main compliment I get is that they love my voice. They say I sound smooth and they want me to do a night time show!”

Psychologist and therapist Raffat Bari explains that while this isn’t a gender-specific issue, there are various societal biases revolving around how women should sound. “There are many negative connotations associated with women who have lower pitched voices, be it bossy, aggressive, masculine. However, there are also often some negative connotations with those who have higher pitched voices, such as being subservient, overly feminine, and even less intelligent. These connotations can all have an impact on our own voice insecurities,” she says.

And there is a name for the cognitive dissonance between how we think we sound and how we actually sound. “Psychologically speaking this phenomenon is a relation to a self-confrontation known as voice confrontation,” Bari continues.

There are, of course, psychological effects that can come about due to our voice insecurities. “Many women can feel less attractive to the opposite sex should they have a lower voice than they originally perceived, whereas other women in the workplace may feel undervalued due to the high pitch of their voice. Both can develop into low confidence and anxiety issues,” she adds.

Bari also explains that the sound of women’s voices can differ depending on where we are in our menstrual cycle, so “we’ll never truly get an accurate sound of our voice.”

So what can we do about it? Well, Bari explains that while it’s a difficult issue to solve, she would remind those struggling with voice insecurities that these are “simply biological differences and humans are created differently.

[Our insecurities] are not always reflective of an external perception. As a therapist I will try and help my clients feel comfortable and confident with who they are regardless of the external,” she says. And she reminds us: “Often people’s insecurities are just that, insecurities.

7 Ways To Start Feeling More Confident About Yourself RN

Study analyzes opioid overdose risk during and after pregnancy among Massachusetts women: Overdose risk drops during pregnancy but rises after delivery, when fewer resources are available to mothers with substance use disorder

Is Your Personality Ruining Your Sleep?

The neurobiological mechanisms behind schizophrenia may depend on gender
mental health, Public Speaking
Latest Posts