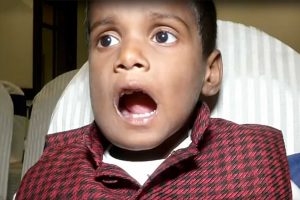 More than 500 teeth were removed by doctors from a little boy’s mouth recently after he started to complain of jaw pain and swelling.

Since the 7-year-old boy’s surgery last month, he now has 21 teeth instead of an unprecedented 526 — many of which were discovered inside a sac embedded in his lower jaw, CNN reports.

Dr. Prathiba Ramani, the head of Oral and Maxillofacial Pathology at Saveetha Dental College and Hospital in India, explained to the outlet that his team learned of the boy’s jaw sac filled with “abnormal teeth” after he received X-rays and scans.

Two surgeons were then able to successfully remove the sac from the boy’s jaw before Ramani’s team underwent a lengthy examination process that confirmed he had hundreds of teeth inside of his mouth.

“There were a total of 526 teeth ranging from 0.1 millimeters (.004 inches) to 15 millimeters (0.6 inches). Even the smallest piece had a crown, root and enamel coat indicating it was a tooth,” Ramani told CNN, adding that the process took nearly five hours to complete.

WARNING: Video below shows a surgical procedure and may be disturbing to some viewers

The boy was first admitted to the Chennai hospital in southern India in July. At the time, the youngster complained of swelling and pain near his molars and lower right jaw, according to CNN.

Doctors then performed X-rays and scans on his mouth, which helped determine that surgery would be necessary to remove the teeth, especially because it was difficult to tell exactly how many were hidden in the jaw sac.

Dr. P. Senthilnathan, who was one of the surgeons to perform the procedure, explained to CNN that despite the severity of the situation, the surgery was not as invasive as one would think.

“Under general anesthesia, we drilled into the jaw from the top,” Senthilnathan, who is currently the head of the hospital’s Oral and Maxillofacial Surgery Department, told the outlet. “We did not break the bone from the sides, meaning reconstruction surgery was not required.”

“The sac was removed. You can think of it as a kind of balloon with small pieces inside,” Senthilnathan added.

After just three days, the little boy was released from the hospital with expectations for a full recovery, according to Ramani.

Doctors believe the boy was suffering from an extremely rare condition called compound composite odontoma, CNN reports. A composite odontoma is when a benign tumor develops in the patient’s mouth and then additional teeth grow within the tumor, according to the Journal of Oral and Maxillofacial Pathology.

Ramani told CNN that the condition may have been genetic or due to environmental factors, including radiation, but its exact cause remains unclear.

The boy’s parents also disclosed that he likely had been suffering from the condition since he was young, as they noticed swelling in his jaw when he was 3 years old.

Still, they said, they were unable to help their son because he was not old enough to sit still or allow doctors to check his mouth.

The little boy’s medical team is now using his story to encourage others to seek immediate treatment for any dental issues that may come up, especially in poverty-stricken areas.

“Earlier, things like, not as many dentists, lack of education, poverty, meant that there was not as much awareness,” Senthilnathan explained to CNN. “These problems are still there.”

“You can see people in cities have better awareness but people who are in rural areas are not as educated or able to afford good dental health,” Senthilnathan added.

The hospital also praised the boy’s doctors for handling the case.

“This is the first-ever case to be documented worldwide, where so many minute teeth were found in a single individual,” the hospital wrote in a statement on their website.

“The expertise and the competence of the team of oral surgeons and oral pathologists in Saveetha Dental College and Hospitals in dealing with such a rare case are to be applauded,” they added.