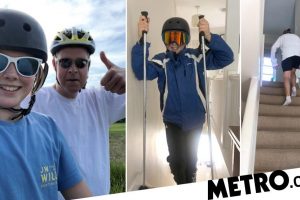 Lockdown has been alive with the sound of home challenges.

You’ve got Colonel Tom Moore walking all those laps in his garden. We had Rob Ferguson climbing up and down the height of Mount Everest at home. And now we’ve got a 13-year-old climbing the same mountain (or the height of it, at least) for the second time to raise money for her dad’s brain tumour treatment – on her home staircase.

Issy Maclay has already climbed the 8,848 metres once and she’s going again in a bid to raise the £8,848 needed to buy a cortical stimulator.

Her dad is currently receiving treatment for a brain tumour at Southampton Hospital and this is Issy’s way of thanking all the doctors, surgeons and nurses who have helped and cared for him.

‘When lockdown down happened I found that I had a lot of time on my hands and as my brother was doing something for the Brain Tumour Charity, I wanted to do something as well to show my appreciation,’ Issy explains.

‘Every day, I climb up the stairs 109 times and I bike and walk up hills. I will carry on doing this for a month or so. I’ve finished once and am going again!’

The first time took 21 days while being home-schooled.

To keep her distracted from the pain of climbing so many stairs, Issy’s dad reads her a book out loud. As of yesterday, Issy had climbed 4,383 metres – meaning that she’s almost at base camp.

Issy’s inspiring challenge has led to lots of support from big names in the adventure world, including Bear Grills who tweeted her a video message of encouragement and polar explorer Ben Saunders.

Do you have a story to share? Get in touch by emailing [email protected]