Home » Health News » Model Born Without Forearm Faces Her Fear of Marriage and Stars on Say Yes to the Dress: I 'Learned to Love Myself First'

Model Born Without Forearm Faces Her Fear of Marriage and Stars on Say Yes to the Dress: I 'Learned to Love Myself First' 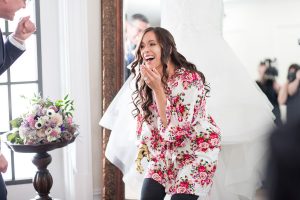 Marine, a 32-year-old model, was born without a right forearm and spent most of her childhood ashamed of being different. With that, any dreams of marriage she had as a little girl were clouded by her fear of taking wedding photos.

“I remember thinking about being at the altar and people taking pictures and my arm being in those pictures,” Marine tells PEOPLE. “I would cry all the time thinking, ‘I don’t want to do that. I don’t want to get married.’ “

Now, Marine, known as the “Bionic Model,” is appearing on TLC’s Say Yes To The Dress, which chronicles the model’s dress hunt leading up to her wedding to 33-year-old Jared Paster. In an exclusive clip of the hit show, Marine opens up to host Randy Fenoli about her lack of self confidence as a child.

“I grew up wanting to just be like everybody else,” Marine tells Fenoli. “I didn’t envision getting married because I dealt with a lot of insecurities about my arm. I didn’t want anyone to see it. I hid it a lot in photos. It took me probably about a decade to find that person that I am now.”

Marine and Paster, a medical school student, met in April 2016 on the dating app Bumble and were engaged just nine months later.

“He’s literally the perfect person for me. He’s always looking to make sure I’m happy,” Marine tells PEOPLE. “He’s very smarty. He’s kind and he’s so thoughtful. He loves that I’m involved with what I do, with modeling and speaking. It’s just a really great balance.”

Marine says that Paster is excited to support her as she works to raise awareness about limb difference.

“I’ve come so far in my attitude in myself and from going to not ever wanting to be anyone’s wife to being super excited to be his wife is incredible to me. It’s life-changing to feel that way,” she says. “I just learned to love myself first and then finding love with somebody else has just been really rewarding.”

Say Yes to the Dress: Rebekah and Her Entourage Have Differing Opinions on the Dresses She’s Tried

“Now I can fully just appreciate being married and going through the wedding planning process. I’ve become this whole new person because of the challenges I’ve set for myself. And growing through those pains of being in front of the camera.”

In another exclusive clip of Say Yes To The Dress, Marine and her crew can’t seem to agree on a gown. “Everyone loves the dress,” Marine says in the clip. “Now I’m so confused more than ever because I don’t love the dress and they do. And the dress that I liked, they don’t.”

Marine will appear on TLC’s Say Yes to the Dress returns on Saturday, March 2 at 8pm ET/PT.

Mom Warns as 3-Year-Old Is Partially Paralyzed From Polio-Like Illness: 'It's Changed Our Lives'