MS: Is a ‘rogue’ brain and lymph node interaction to blame? 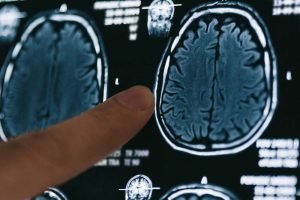 The National Center for Complementary and Integrative Health say that multiple sclerosis (MS) affects around 400,000 people in the United States and about 2.5 million people globally.

In MS, the immune system treats myelin — the substance that coats axons, the “stems” that connect brain cells to one another — as a pathogen, attacking and destroying it.

This leads to impaired signaling between neurons, causing impaired balance and coordination, weakened muscles, and blurred vision, to name but a few of the common symptoms of MS.

The actual reasons behind why the immune system mistakenly strikes against healthy structures in the brain remain unclear.

However, new research by the University of Virginia School of Medicine in Charlottesville suggests that it may be down to an unexpected signal transmitted by the brain to the lymph nodes.

‘A signal from the brain’ may trigger MS

Last year, some of the researchers involved in the recent study made a groundbreaking discovery — namely, that the brain is “equipped” with lymphatic vessels that contribute to the removal of “waste” in the brain.

Now, these researchers explain that this same system may be involved in the development of MS, as they carry signals from the brain to the immune system that “instruct” the latter to trigger some of the mechanisms that create this condition.

These findings — which now appear in the journal Nature Neuroscience — also suggest a potential treatment for MS, based on blocking the signals transmitted by the brain to the lymph nodes using the lymphatic vessels.

“Our data suggests that there is a signal coming from the brain to the lymph nodes that tells immune cells to get back into the brain, causing the [MS] pathology. This is an important proof of principle that exploring the role of these vessels in different neurological disorders, including multiple sclerosis, is worth it.”

In the new study, led by Jonathan Kipnis, the team managed to deter the development of MS in a mouse model by blocking or destroying the lymphatic vessels in the rodents’ brains. All of these strategies led to lower levels of the immune cells that cause paralysis in MS.

“The idea was to prevent more widespread damage to the nervous system,” explains co-author Jasmin Herz.

“If communication of brain inflammation through lymphatic vessels is the root cause of multiple sclerosis, therapies targeting these vessels could be clinically important,” she adds.

While they were able to learn how the brain sends the troubling signal to the immune system, the researchers still do not understand the signal’s specifics.

“I think the next step in this specific research is to identify what that signal is,” notes Louveau. “Is it a cellular signal, is it a molecular signal?”

Once that becomes clear, Louveau says, the researchers should “then to try to target that signal specifically,” to prevent the development of MS without actually harming any elements of the lymphatic system.

Moreover, the researchers explain that, while acting on the lymphatic vessels in the brain was an effective strategy, they did not block the development of MS altogether. This, they explain, suggests that there are probably other factors that contribute to triggering this condition.

However, the study also allowed the scientists to confirm how the lymphatic vessels in the brain actually work.

“Meningeal lymphatic vessels are quite small compared to other lymphatics in the body, and we and others wondered if this might limit the amount and size of cargo they can pass through,” explains Herz.

“During inflammation,” she goes on, “they did not change in size or complexity much, but what was really exciting to discover [was that] they allowed whole immune cells to traffic through them, and we found the molecular cues for that.”

‘Out of control interactions’

The researchers’ new and former research on the interactions between the brain and the immune system may lead to new ways of thinking about MS, as well as other neurological conditions such as Alzheimer’s disease.

“These findings on the role of brain-draining lymphatic vessels in MS, together with our recent work on their role in Alzheimer’s disease, demonstrate that the brain and the immune system are closely interacting. When these interactions go out of control, pathologies emerge,” says Kipnis.

“The idea that we could target major neurological disorders through therapeutic manipulation of peripheral structures, such as lymphatic vessels, is beyond exciting,” he says.

Kipnis has now also entered an agreement with the biopharmaceutical company PureTech Health, in which he commits to further investigate the potential clinical applications of his team’s recent research.

Is a Haywire Body Clock Tied to Mood Disorders?

What to eat before a workout and when to eat it
'rogue', a, and, blame, brain, interaction, Is, lymph, MS, node, to
Latest Posts