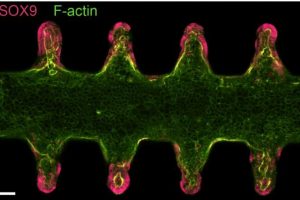 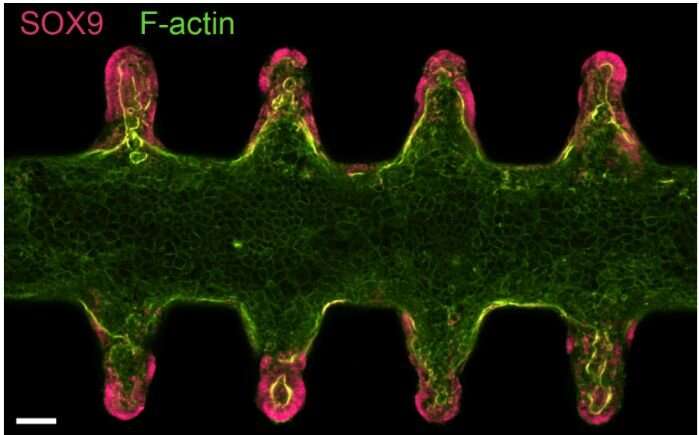 Organoids are fast becoming cutting-edge tools of modern life sciences. The idea is to use stem cells to build miniature tissues and organs that accurately resemble and behave like their real counterparts.

From basic biological research to drug development and testing, organoids could complement animal testing by providing healthy or diseased human tissues, expediting the lengthy journey from lab to clinical trial. Beyond that, there is the possibility of using organoid technology to replace damaged tissues or even organs in the future by taking stems cells from the patient and growing them into a new liver, heart, kidney or lung.

So far, established methods of making organoids come with considerable drawbacks: Stem cells develop uncontrollably into circular and closed tissues that have a short lifespan, as well as non-physiological size and shape, all of which result in overall anatomical and/or physiological inconsistency with real-life organs.

Now, scientists from the group led by Matthias Lütolf at EPFL’s Institute of Bioengineering have found a way to guide stem cells to form an intestinal organoid that looks and functions just like a real tissue. Published in Nature, the method exploits the ability of stem cells to grow and organize themselves along a tube-shaped scaffold that mimics the surface of the native tissue, placed inside a microfluidic chip.

The EPFL researchers used a laser to sculpt this gut-shaped scaffold within a hydrogel, a soft mix of crosslinked proteins found in the gut’s extracellular matrix supporting the cells in the native tissue. Aside from being the substrate on which the stem cells could grow, the hydrogel thus also provides the form or “geometry” that would build the final intestinal tissue.

Once seeded in the gut-like scaffold, within hours, the stem cells spread across it, forming a continuous layer of cells with its characteristic crypt structures and villus-like domains. Then came the surprise: The scientists found that the stem cells automatically arranged themselves in order to form a functional tiny gut.

“It seems like the geometry of the hydrogel scaffold, with its crypt-shaped cavities, directly influences the behavior of the stem cells so that they are maintained in the cavities and differentiate in the areas outside, just like in the native tissue,” says Lütolf. The stem cells didn’t just adopt to the shape of the scaffold, they produced all the key differentiated cell types found in the real gut, with some rare and specialized cell types normally not found in organoids.

Intestinal tissues are known for the highest cell turnover rates in the body, resulting in a massive amount of shed dead cells accumulating in the lumen of the classical organoids that grow as closed spheres and require weekly breaking down into small fragments to maintain them in culture. “The introduction of a microfluidic system allowed us to efficiently perfuse these mini-guts and establish a long-lived homeostatic organoid system in which cell birth and death are balanced,” says Mike Nikolaev, the first author of the paper.

The researchers demonstrate that these miniature intestines share many functional features with their in vivo counterparts. For example, they can regenerate after massive tissue damage and they can be used to model inflammatory processes or host-microbe interactions in a way not previously possible with any other tissue model grown in the laboratory.

For Down Syndrome Adults, Death and Dementia Often Come Together

The fitness industry is overwhelmingly white – and that needs to change
and, function, grow, Like, Next-gen, organoids, Real, tissues
Latest Posts