Home » Health News » Painkiller warning: Can you take paracetamol and ibuprofen together?

Painkiller warning: Can you take paracetamol and ibuprofen together? 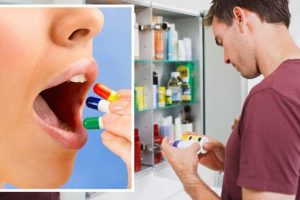 Ibuprofen and paracetamol are two of the most commonly used over-the-counter painkillers, but there is often confusion about how to take them. While these medicines are deemed safe enough to be used without a prescription, it doesn’t always mean they should be used in conjunction with one another. Whether you’re looking to banish aches, pains or a high temperature, this is everything you need to know about mixing paracetamol and ibuprofen.

Over the counter painkillers can be categorised into two main groups known as acetaminophen (Tylenol) and nonsteroidal anti-inflammatory drugs (NSAIDs).

While paracetamol and ibuprofen are both used to treat generic pain, the two fall into separate categories in terms of the medicinal purpose.

Both OTC drugs are effective at providing pain relief on their own, but how safe is it to combine the two together?

READ MORE: Vitamin B12 deficiency: The feeling in your body that could be a sign

How to take paracetamol and ibuprofen safely

To safely use both paracetamol and ibuprofen as pain relief, you can either take both tablets at the same time, or spaced apart.

Adults can take a maximum of four doses (up to eight 500mg tablets in total) in 24 hours, though you should wait at least four hours between each dose.

Adults can also usually take one or two 200mg tablets of ibuprofen every four to six hours, but shouldn’t take more than 1,200mg (six 200mg) tablets in the space of 24 hours.

Paracetamol takes up to one hour to work while ibuprofen can take effect in as little as 20-30 minutes, so it is often best to take the two at the same time.

Who should not take ibuprofen

Most adults and young people can take ibuprofen, but there are a number of groups who should stick to paracetamol instead.

According to the NHS, you should not take ibuprofen by mouth or apply it to your skin if you:

You should speak to a pharmacist or doctor before taking oral forms of ibuprofen if you:

Currently have shingles or chickenpox

Who should not take paracetamol?

Most people, even pregnant and breastfeeding women can safely use paracetamol for pain relief.

While this common drug is generally safe, the following groups should consult a doctor or pharmacist before taking paracetamol:

Overdosing on both paracetamol or ibuprofen can cause serious side effects, so you should never attempt to increase the recommended dose or double your dose for more severe pain.