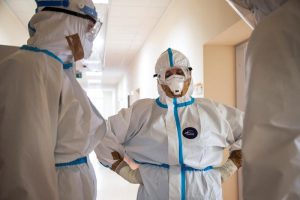 OLSZTYN, Poland (Reuters) – COVID ward doctor Lukasz Grabarczyk fears his city of Olsztyn in Poland’s north-eastern lake district is starting to experience its worst period of the pandemic, as it becomes the epicentre of the country’s third wave.

Epidemiologists and doctors are trying to find out why the sparsely-populated region, which up until now had low infection rates, has seen such a sharp spike, especially of the variant first detected in Britain, and believe Poles returning from there may be behind it.

On Wednesday, the region of 1.4 million saw 1,132 new daily coronavirus cases. Its infection rates per 100,000 people are consistently more than double the national average, according to recent data.

“There’s an avalanche of new patients and we are running out of beds,” said Grabarczyk.

Professor Andrzej Horban, the Polish prime minister’s top COVID advisor, recently told private broadcaster Polsat : “This could be the effect of visits by Poles during the Christmas break. We know that in Britain… this variant was first discovered around late September and the peak of infection was in December, so it took about three months to dominate the population.”

Last week, Poland’s government increased restrictions on the region, closing shopping centres, hotels, cinemas and museums and sending children in the first three years of primary school back to remote learning after having lifted restrictions only two weeks earlier.

Jacek Kosmala, the mayor of the town of Nidzica, also believes the spike is due to locals working in Britain and Germany and then returning home with the virus.

The lake district is one of the poorest parts of Poland and many locals left to seek work abroad.

Poland’s government faced domestic criticism for allowing flights in from Britain on Dec. 21 as infection rates were soaring there and as other countries halted all flights.

Passengers that arrived at the local Olsztyn-Mazury airport did not require tests to fly to Poland nor did they get tested upon landing, an airport representative said. No flights have gone to or from Britain since mid-January from the airport and there were no incoming flights after Christmas, she added.

Krzysztof Saczka, Poland’s deputy head of the Sanitary Inspectorate, said he didn’t believe the spike was tied to travel but was rather due to the natural spread of the virus and also citizens not following restrictions.

Patients in Grabarczyk’s ward said too many people in the lake district flouted restrictions, and were not wearing masks or not wearing them properly.

Teresa Drozdowska, a 57 year-old COVID patient at the ward and a teacher who usually lives in Cologne, Germany, got sick in Poland after coming to visit her family. She fears the worst of the pandemic could still be ahead as the weather gets warmer.

“We know that more people will come in the spring. This is the kind of terrain that everyone wants to come to for fun. Vacations, meetings…this is what I’m afraid of. I’m afraid of what will come.”