Pruning the dendritic tree for a better understanding of epileptic seizures 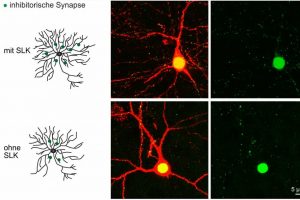 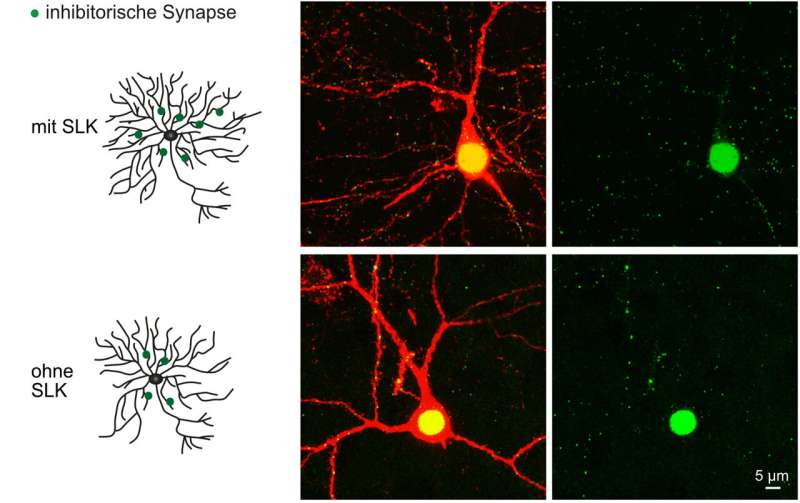 Researchers at the University of Bonn have shed light on the function of the enzyme SLK for the development of nerve cells in the brain. If it is missing, the neurons’ branches are less abundant. In addition, it is then more difficult to inhibit the activity of the cells. This is consistent with the fact that there is less SLK in diseased brain tissue from epilepsy patients. Epileptic seizures are characterized by overexcitation of neuron clusters. The findings may help to improve treatment of the disease. The study is published in the prestigious Journal of Neuroscience.

SLK belongs to the large group of kinases. These enzymes are extremely important: They attach phosphate groups (which are small molecular residues with a phosphorus atom in the center) to proteins and thus alter their activity. Kinases are involved in the regulation of almost all life processes in animals.

The kinase SLK was already known to play an important role in embryonic development: One of its effects is on the growth of cells and their migration in the body; these processes are also essential for the maturation of neurons. “We therefore investigated what function SLK performs in nerve cells,” explains Prof. Dr. Albert Becker from the Institute of Neuropathology at the University of Bonn.

The researchers inhibited the production of the SLK protein in neurons of mice. “This changed the appearance of the neurons,” says Anne Quatraccioni, who is doing her doctorate at the Institute of Neuropathology in the research group of Prof. Dr. Susanne Schoch McGovern: “The dendrites, which are the extensions that receive signals from other neurons and conduct them to the cell body, branched less.”

The dendrites resemble a kind of tree dotted with tiny contact points, the synapses. This is where extensions of other nerve cells dock and transmit electrical impulses to the tree. The observed “thinning” did not affect the thick main branches, but exclusively the smallest shoots. The synapses on these small branches are called excitatory: Signals received there have an arousing effect. This means that they increase the probability that the neuron will in turn generate an electrical signal, in other words, that it will “fire.”

When there are fewer side branches, the synapses could concentrate in a smaller area and thereby gain influence, making the neuron easier to excite (since the synapses are excitatory). “Surprisingly, however, we did not find an increased density of excitatory synapses,” Quatraccioni points out. “Nevertheless, the affected neurons were more excitable. But there had to be other reasons.”

The cause is not to be found in the delicate twigs, but in the thick main branches. Numerous synapses are also located there, but of a different type: They have an inhibitory effect. Any signal received by these synapses prevents the nerve cell from firing. “The mice initially formed a normal amount of these inhibitory synapses,” Quatraccioni explains. “However, after a few days of life, their density began to decrease. This loss kept progressing.”

SLK therefore appears to be important in maintaining normal levels of inhibitory synapses. Without the kinase, the affected neurons become increasingly difficult to inhibit over time. This fits in with the fact that the researchers were able to detect SLK deficiency in the nerve cells of brain tissue from epilepsy patients. During epileptic seizures, whole areas of the brain are overexcited, meaning that the neurons fire too easily.

The findings could also explain why the effects of the drugs diminish over time in some sufferers. “Perhaps this effect is not due to resistance to the drugs, but to the progressive loss of the inhibitory synapses,” says Prof. Dr. Susanne Schoch McGovern. The findings therefore provide new insights into how the disease develops.

Is money for learning a good idea? The tricky neuroscience of money and memory
dendritic, for, Pruning, the, tree
Latest Posts