Scientists find too much of certain chemical can trigger baldness 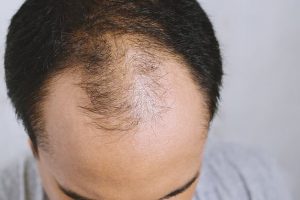 Is THIS the cure for baldness? Researchers discover protein at the root of hair loss … and believe it can be manipulated to regrow a lost head of hair

A research team believes that they may have found a cure for baldness by preventing chemical buildups that can cause it to occur in the first place — and even use it to regenerate a person’s hair after it is lost.

Modelling at the University of California, Riverside (UCR), found that when the chemical is in high concentrations it kills hair follicles. But that when the levels are ‘just right’ it causes them to grow new hairs.

The protein at the center to their discovery is TGF-beta, which not only controls the growth of a follicle but can also lead to its death. The UCR research team believes that its levels can be ‘controlled’ to stop hairloss from happening.

Around 40 million Americans are bald and, while many just accept it as a part of ageing, the new findings suggest that their may be a way to stop the shedding of hair later in life. 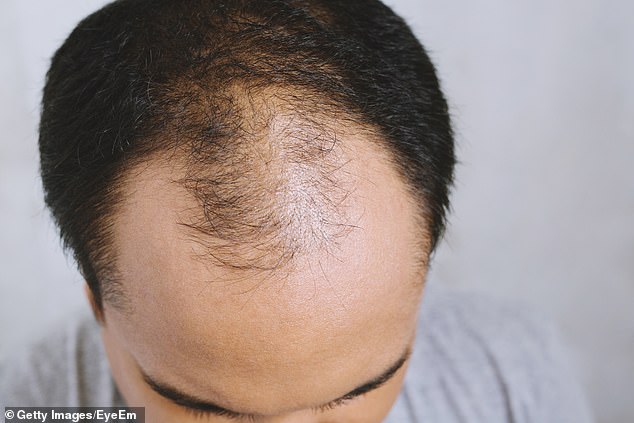 Modelling at the University of California, Riverside, found high concentrations of TGF-beta — naturally found in the follicles — can be toxic to them (stock image)

Modelling performed by the team found high concentrations of TGF-beta — naturally found in the follicles — can be toxic to them and lead to their death, and eventual falling out.

Baldness may be triggered by so much of a chemical building up in hair follicles that they die, the team says.

What is the difference between alopecia and age-related hair loss?

The follicles hold hair in place, so when they are damaged the hair starts to fall out.

It usually causes circle or oval-shaped patches of baldness and can lead to someone becoming completely hairless.

The disease can occur at any time in life and is unpredictable, with experts still uncertain what in a genetic makeup causes it.

Genes inherited from either parent cause the follicles to shrink over time and eventually stop growing hair.

It can start in teenage years but is more common in later life.

It is not caused by an immune response and therefore is not affected by drugs aiming to suppress the body’s defense system.

When ‘just right’ levels of the protein was reached in the follicles cells were triggered to generate new hairs.

Cells in hair follicles periodically die, which causes the hair to fall out — a process that happens about 100 times a day.

But each also contains stem cells, that can generate new hair-making cells to ensure the lost strand is regrown.

In baldness, however, this process is shut off — with Wang and co-author Dr Katherine Dinh arguing this is down to the chemical TGF-beta.

‘Even when a hair follicle kills itself, it never kills its stem cell reservoir. When the surviving cells receive the signal to regenerate, they divide, make a new cell and develop into a new follicle,’ Wang said.

‘TGF-beta has two opposite roles in this. It helps activate some hair follicle cells to produce new life, and later, it helps orchestrate apoptosis, the process of cell death.’

‘Our new research gets us closer to understanding stem cell behavior, so that we can control it and promote wound healing,’ she added

TGF-beta is a chemical that normally stimulates growth which is secreted by many cells across the body, including white blood cells.

In the research, scientists used datasets based on testing done on the skin’s surface that revealed the concentration of different chemicals.

Baldness — which can afflict both men and women — is often inherited in genes.

But it can also be caused by the body starting to attack its own hair follicles —  in a condition known as alopecia areata — which robs people of their hair within weeks.

Stress and wearing extensions that pull on hair have also been implicated in hair loss.

Around 40 million people in the United States are bald, figures suggest.

There is currently no cure for this, but several treatments are available that studies have shown can slow hair loss or even reverse it in some cases.

Surgeries where hair is transplanted from one area of the body onto the scalp are also available.