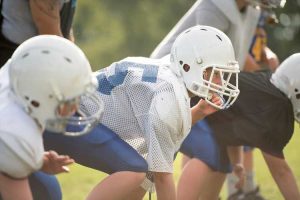 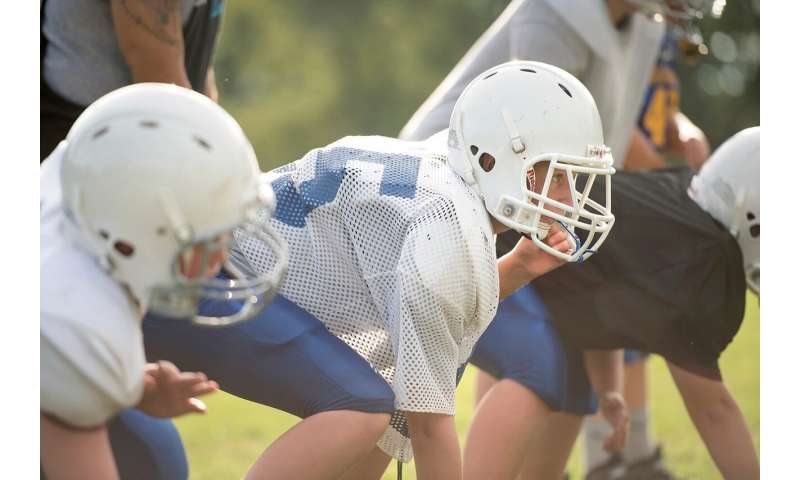 For decades, there’s been a widespread assumption among people with an interest in sports-related injury that youth football players are more vulnerable to concussion and other head injuries than their older, bigger counterparts.

The Virginia Tech Helmet Lab has published the first data validating that conventional wisdom, in a study released in the January issue of the Annals of Biomedical Engineering.

The research, funded by a five-year grant from the National Institute of Neurological Disorders and Stroke of the National Institutes of Health, demonstrated that the head accelerations leading to concussion in youth football players are lower than those that typically cause injury in high school, collegiate, and professional athletes—data that will be critical for designing and testing protective equipment.

“These are the first biomechanical data characterizing concussion risk in kids,” said Steve Rowson, an associate professor of biomedical engineering and mechanics and the director of the Virginia Tech Helmet Lab. “Children aren’t just scaled-down adults: Differences in anatomy and physiology, like head-neck proportions and brain development, contribute to differences in tolerance to head impact. These results can lead to data-driven interventions to reduce risk in youth sports.”

Kids between the ages of 9 and 14 make up the largest group of football players in the country. But the research cataloging head impacts on U.S. football fields, and determining which ones are most likely to cause injury, has focused on high school, collegiate, and pro players, limiting the understanding of what conditions lead to concussion in youth football.

In younger players, the fatty myelin sheaths that help protect brain cells haven’t fully developed. They also tend to have larger heads relative to their bodies than adult players do, with less neck musculature to help absorb the force of an impact. For all these reasons, researchers had presumed that youth players were more susceptible to concussion. But they needed data to prove it.

Virginia Tech has been studying head impacts in football since 2003, when Stefan Duma, the Harry Wyatt Professor of Engineering and founder of the Helmet Lab, instrumented the helmets worn by the university’s varsity football team with sensors to measure head impacts.

Since then, Duma, Rowson, and their research team have expanded their studies to more sports and a broader range of demographic groups. They’ve been studying youth players since they won this critical grant from the NIH in 2015.

For the study, they partnered with researchers at Brown University and Wake Forest University to track six different youth football teams in Virginia, North Carolina, and Rhode Island. More than 100 players wore helmets lined with sensors that measured the linear and rotational acceleration of their heads during four seasons’ worth of practices and games, recording thousands of impacts. All concussions were diagnosed by clinicians at each site; neuropsychological testing before and after each season measured the players’ cognitive function.

That data allowed the researchers to develop a mathematical relationship between the magnitude of a head impact and the risk of concussion. What they found was that youth players are on average more susceptible to concussion at lower levels of acceleration than high school and collegiate players are.

“These numbers prove for the first time that youth players are at a higher risk of injury at lower head accelerations,” Duma said, “but it is important to note that the overall head acceleration exposure in youth football is much lower than in adult football.”

Despite that heightened susceptibility, concussions in youth football are relatively rare: Younger, lighter players collide with less force than adult athletes, so they’re less likely to jostle their brains enough to cause serious injury.

But as with any sport, there’s still a risk of injury. So effective protective equipment is critical—and that’s the practical value of this study, Duma explained. Knowing the levels of acceleration that put youth players at risk for concussion provides a benchmark to use for helmet testing.

Earlier this year, the Helmet Lab released the industry’s first youth-specific football helmet ratings, evaluating the helmets with laboratory tests based on their on-field data.