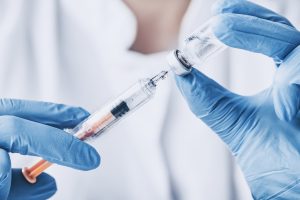 According to the Centers for Disease Control and Prevention, no scientific study has found a link between vaccines and autism.

A nurse in Texas was fired after she allegedly posted information about a patient with the measles on an anti-vaccination Facebook page.

The patient, a toddler believed to have the measles, was being treated at Texas Children’s Hospital where the nurse works.

The nurse allegedly shared information about his condition on the “Proud Parents of Unvaccinated Children-Texas” Facebook page, in posts that have since been deleted. A concerned parent who saw the posts took screenshots and put them on the Texas Children’s Hospital’s Facebook page on Friday.

“For the first time in my career I saw measles this week … and honestly, it was rough. This kid was super sick,” the nurse allegedly wrote in her post. “I think it’s easy for us nonvaxxers to make assumptions but most of us have never and will never see one of these diseases. By no means have I changed my vax stance, and I never will. But I just wanted to share my experience and how much worse it was than I expected.”

“Seeing it made me a little more humble and maybe a little more understanding,” she added. “I’ll continue along my little non-vax journey with no regrets, but I’ll definitely have more compassion to those who vehemently vaccinate.”

The nurse also included details on how the child likely developed measles, and said that she considered carrying the virus home to give to her own 13-year-old child. Some people believe that “natural immunization,” where a child becomes immune to the disease by contracting and treating for it, is preferable to a vaccine, but the World Health Organization explicitly warns against doing so, because of possible complications.

“The price paid for getting immunity through natural infection might be cognitive impairments from Haemophilus influenzae type b (Hib), birth defects from rubella, liver cancer from hepatitis B virus or death from complication due to measles,” the organization says.

The concerned parent who shared the post called on the hospital to reconsider having the nurse on staff.

“It is terrifying that in the pediatric ICU, you have an antivax RN employed,” they wrote. “My immunocompromised child needs to be protected from vaccine preventable diseases.”

“This is EXACTLY why measles is making a comeback,” they added. “There are entire Facebook groups in Texas trying to get a sample of this child’s measles so they can arrange a measles party (purposefully exposing children to measles for ‘natural immunity.’)”

Texas Children’s Hospital replied to the post an hour later that they are looking into the situation, and the nurse was fired the next day, they tell PEOPLE in a statement.

“We were made aware that one of our nurses posted protected health information regarding a patient on social media. We take these matters very seriously as the privacy and well-being of our patients is always a top priority. After an internal investigation, this individual is no longer with the organization.”

Measles was eliminated from the U.S. in 2000 after the child vaccination program started in 1994, but is still common in other parts of the world, such as Europe, Asia, the Pacific and Africa. Cases in the U.S. typically start after someone returns from international trips, and the highly contagious disease can spread quickly among communities with unvaccinated people, though the majority of Americans do vaccinate their children. The Centers for Disease Control provide a recommended schedule for vaccinations.