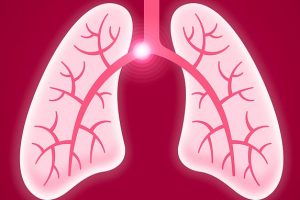 A one-minute breath test could speed up lung disease diagnosis and help ensure patients get the correct treatment.

The hand-held device measures levels of hydrogen peroxide in breath. Hydrogen peroxide is best known as a key bleaching ingredient in hair dye, but it is also naturally produced by the body, where it is a telltale sign of inflammation in the airway.

Measuring the patient’s hydrogen peroxide levels could give doctors a quick and simple way of identifying lung diseases.

The device is being trialled on NHS patients with asthma and chronic obstructive pulmonary disease (COPD), a group of lung conditions including emphysema and chronic bronchitis. 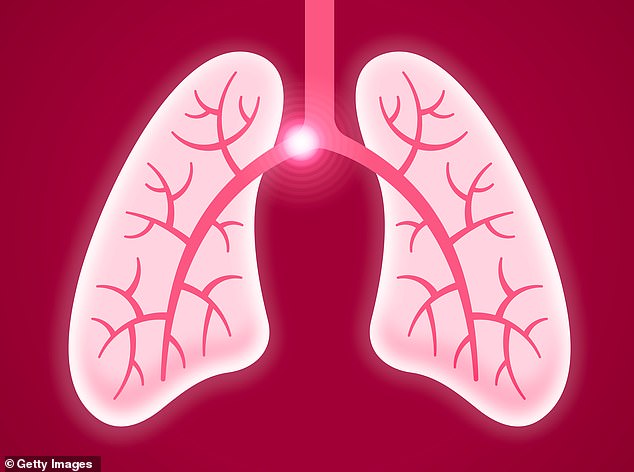 Did you know? A one-minute breath test could speed up lung disease diagnosis and help ensure patients get the correct treatment

Thousands of patients with COPD have been misdiagnosed with asthma (and given the wrong treatment), as Good Health recently reported — this new, non-invasive test could help to quickly distinguish between the two conditions.

A common feature of COPD and asthma is airway inflammation. Different inflammatory cells are involved in the two conditions, and the inflammation seen in asthma is mainly located in the larger airway, while COPD mainly affects the small airway passages and lungs.

The device measures neutrophil inflammation, which is lower in asthma. The main tool for measuring airway inflammation is fibreoptic bronchoscopy, an invasive procedure where a fine tube with a camera on its end is fed down the throat into the passages of the lungs.

Samples of tissue and fluid can be taken by instruments that are passed down the tube. Patients can find the procedure uncomfortable, despite sedation, and potential complications include bleeding, infections and irritation of the airway. In contrast, with the new breath test, called Inflammacheck, the patient simply breathes into the battery-powered device for up to one minute or around 20 breaths.

It sends immune cells called neutrophils to the damaged areas where they then remove damaged tissue and trigger inflammation. 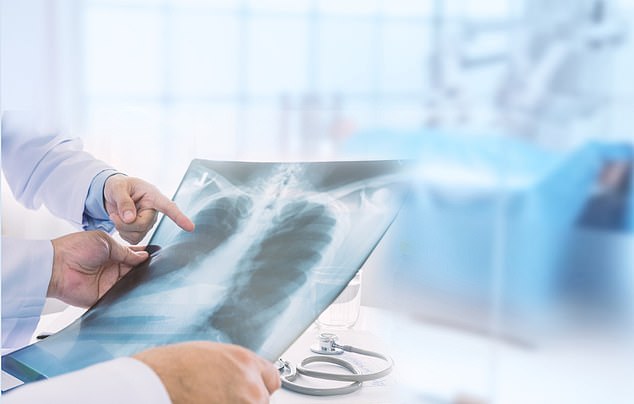 The device is being trialled on NHS patients with asthma and chronic obstructive pulmonary disease (COPD), a group of lung conditions including emphysema and chronic bronchitis

Although inflammation is part of the healing process, it can also be damaging and, in asthma, causes the temporary narrowing of the airways that carry oxygen to the lungs.

This leads to coughing, wheezing, shortness of breath, a feeling of tightness in the chest and other symptoms. Similar symptoms are seen in COPD, and patients may need to clear the throat first thing in the morning, due to excess mucus in the lungs.

There may also be a chronic cough that can produce mucus that is clear, white, yellow or greenish.

The device is being tested in a 12-month study on 90 volunteers at Portsmouth Hospitals NHS Trust — some have asthma or COPD while others are healthy.

It is hoped it will help speed up diagnosis and provide valuable information about how well treatments are working.

The researchers said: ‘It may give doctors an immediate insight into the inflammatory state of the airway, and has the potential to identify specific inflammation that would guide treatment decision making. This could aid earlier diagnosis and personalised management plans, improving patient care.’

Professor Pallav Shah, a consultant physician at the Royal Brompton Hospital, London, said: ‘This is a consistent method for measuring neutrophil inflammatory activity.

‘Its clinical value needs to be proven, but it is quite a promising research tool.’

n cutting out soft drinks could lower the risk of asthma, according to a study reported in the journal Nutrients.

Researchers at Qatar University analysed data from nearly 1,000 people. Those who had soft drinks seven times a week were 2.6 times more likely to have asthma compared to non-consumers.

One theory is that compounds in fizzy drinks, possibly preservatives, increase inflammation in the airway.

Nick Ferrari reveals the procedure that resolved his gynaecomastia

Weight loss surgery may work better for teens than adults