Home » Health Problems » Unless we spot changes, most life experiences are fabricated from memories

Unless we spot changes, most life experiences are fabricated from memories 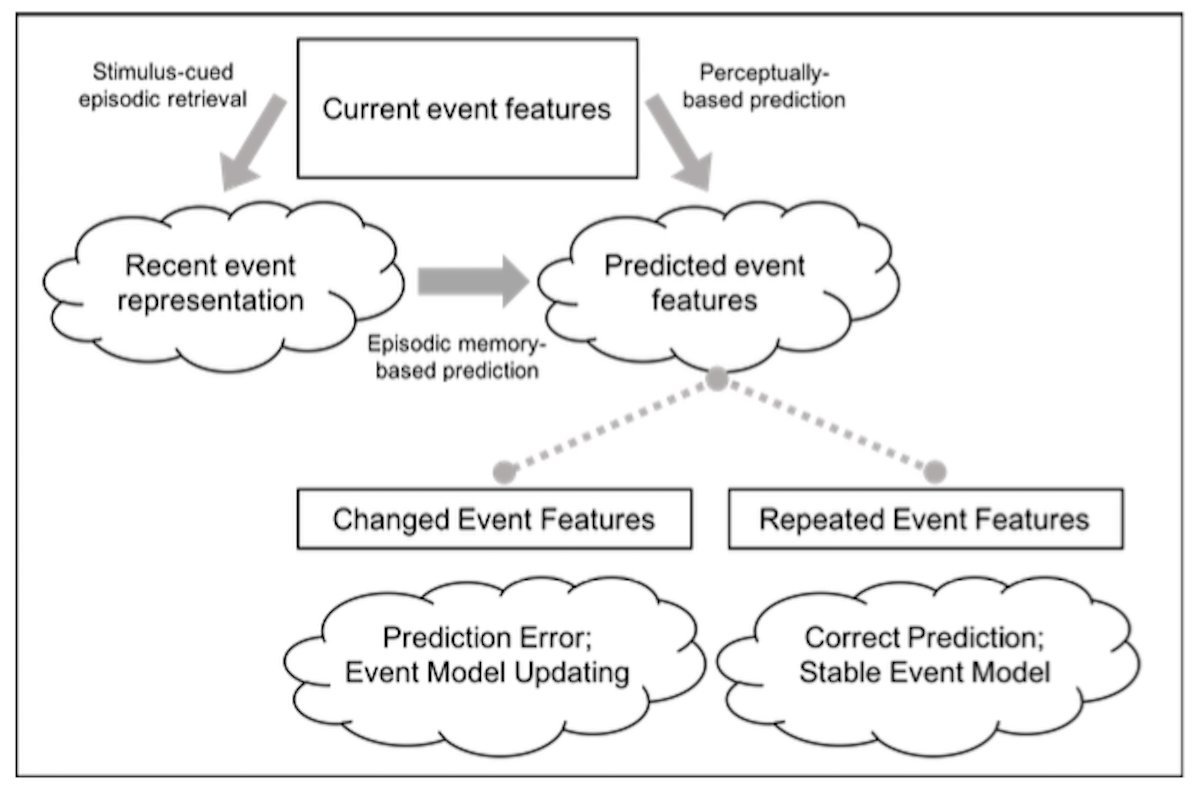 We may not be able to change recent events in our lives, but how well we remember them plays a key role in how our brains model what’s happening in the present and predict what is likely to occur in the future, finds new research in the Journal of Experimental Psychology: General.

“Memory isn’t for trying to remember,” said Jeff Zacks, professor of psychology and brain sciences in Arts & Sciences at Washington University in St. Louis and an author of the study. “It’s for doing better the next time.”

The study, co-authored with Chris Wahlheim of the University of North Carolina at Greensboro (UNCG), brings together several emerging theories of brain function to suggest that the ability to detect changes plays a critical role in how we experience and learn from the world around us.

Known as “Event Memory Retrieval and Comparison Theory” or EMRC, the model builds on previous research by Zacks and colleagues that suggests the brain continually compares sensory input from ongoing experiences against working models of similar past events that it builds from related memories.

When real life does not match the “event model,” prediction errors spike and change detection sets off a cascade of cognitive processing that rewires the brain to strengthen memories for both the older model events and the new experience, the theory contends.

“We provide evidence for a theoretical mechanism that explains how people update their memory representations to facilitate their processing of changes in everyday actions of others,” Wahlheim said. “These findings may eventually illuminate how the processing of everyday changes influences how people guide their own actions.”

In their current study, Zacks and Wahlheim tested the change detection model with experiments that take advantage of the well-documented fact that older adults often have increased difficulty in recalling details of recent events.

Groups of healthy older and younger adults were shown video clips of a woman acting out a series of routine, everyday activities, such as doing dishes or preparing to exercise. One week later, they were shown similar videos in which some event details had been changed.

“When viewers tracked the changes in these variation-on-a-theme videos, they had excellent memory for what happened on each day, but when they failed to notice a change, memory was horrible,” Zacks said.

Previous research by Zacks and others has shown that the brain breaks up the activities of daily life into a hierarchy of distinct smaller events or “chunks,” and that our ability to identify transitions or “boundaries” between these chunks has consequences for how these experiences gets encoded in our memories.

For instance, just walking through a doorway, which the brain perceives as an “event boundary,” has been shown to diminish our recollection for information being processed just before we entered the new room. Thus, we sometimes find ourselves forgetting the reason we entered a room in the first place.

This event-driven model of brain function, known as Event Segmentation Theory (EST), has been gaining credence over the last decade.

Zacks, the author of the book “Flicker: Your Brain on Movies,” has used EST to explain how the brain processes fast-paced movie cuts and other film-making techniques that force viewers to process sensory input in ways evolution could never have predicted.

Event models may be based on previous personal experiences, but might also include perceptions gleaned from conversations with friends or similar situations portrayed in books, movies and television.

Thus, someone’s “event model” for a future wedding day might be based on other weddings attended, past gatherings of family and friends and tidbits gleaned from repeat viewings of the movie, “My Big Fat Greek Wedding.”

Event Memory Retrieval and Comparison Theory takes the event segmentation model a step further by introducing concepts from the “memory-for-change” framework, a theory put forth in recent research by Wahlheim and Larry Jacoby.

Jacoby is a prominent cognitive psychologist known for work on the interplay of consciously controlled versus more automatic influences of memory. He is now a professor emeritus of psychological & brain sciences at Washington University.

Wahlheim completed his Ph.D. and postdoctoral training at Washington University, and now directs the Memory and Cognition Lab as an assistant professor at UNCG.

In recent research, Jacoby and Wahlheim exposed study participants to series of lists that included pairs of related words, including some lists where an originally presented word was paired with a new word.

While seeing the same “trigger” word associated with multiple word pairs has been shown to cause interference in the recall process, Jacoby and Wahlheim found that memory improved when participants both recognized the change during presentation and later remembered that the change had been recognized.

The memory-for-change framework suggests that noticing the change is critical to the creation of a memory trace that ties all these events together, strengthening our memory for the original pairing, the recognition of change and the new pairing.

The current study explores the memory-for-change phenomena in a more naturalistic scenario in which videos of daily activities replace paired-word lists. It also adds a chronological element by suggesting the videos represent activities filmed one week apart.

Findings suggest that establishing time-based connections improves recall because memory for a later event becomes embedded within a trace that includes reminding of an earlier event. Recent events embed earlier events, but not vice versa.

More broadly, these studies provide evidence that a major function of our memory is to help us retrieve relevant experiences and relate them to what is happening in the current environment.

Kidney transplant recipients do not contract hepatitis C if receiving kidneys from donors with a history of hepatitis C
are, changes, experiences, fabricated, from, Life, memories, Most, spot, Unless, we
Latest Posts