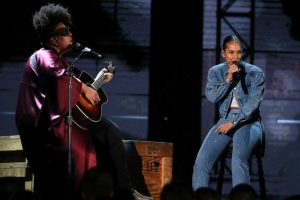 At the Grammy Awards on Sunday night, Alicia Keys gave us chills on more than one occasion. Not only did the host of the evening pay tribute to Kobe Bryant, but she also took the stage to perform her new single “Underdog,” and I quickly added it to my playlist of songs to play my kid when he’s feeling down.

“They said I would never make it/ But I was built to break the mold./ The only dream that I’ve been chasing is my own,” Keys sings in the chorus of the song, which came out earlier in January.

“This song is really talking about how do we defy the odds,” she told Genius.com, describing how being raised by her single mother in New York’s Hell’s Kitchen and Harlem inspired this song. For her, the rhythm and lyrics call to mind the experience of walking through the city, encountering strangers and being touched by their stories. “I think in a lot of ways, neither she nor I was supposed to make it. So I definitely started with underdog roots.”

The lyrics of “Underdog” seemed all the more meaningful as Keys was accompanied on guitar by Brittany Howard, the Alabama Shakes and solo performer who has broken the mold and defied the odds with her musical success too.

Unofficial clips of that performance keep getting removed from the internet, so you’ll have to enjoy Keys’ official video instead:

Howard taught herself how to play guitar after her older sister died of cancer and her father left the family when she was 9. As biracial children, both Howard and Keys faced even more obstacles to their success growing up. Yet there both these ladies were, at the top of the game on that Grammy stage.

These are the kind of details I totally plan to share with my son when I play him “Underdog.” It’s joining the ranks of Pink’s “Raise Your Glass” and “This Is Me” from The Greatest Showman — songs about people fighting the haters and making their own path — in my emotional first-aid kit for when he faces bullies or temporary setbacks. After hugs and long talks, a dance party with these tunes shakes off those blues pretty effectively.

Even though I don’t know if he’ll ever be one of the “hustlers trading at the bus stop, single mothers waiting on a check to come, young teachers, student doctors, sons on the front line knowing they don’t get to run” of Keys’ song, my son can use this message too. There are always naysayers out there — be they teachers, peers or random strangers — who will look at his unique personality or big dreams and tell him to sit down, blend in and try something easier. All I want is for him to listen to her words and “keep on keeping at” what he loves.

The #MyLastShot Gun Violence Campaign Is Breaking Our Hearts: Here's What Parents Need to Know

This is What the Tooth Fairy Pays in Your State

Jeremy Roloff Is Being Criticized for This Insta Photo of Baby Ember
'Underdog', Alicia, Is, keys, kids, need, our, Song, the, This, year
Latest Posts