Home » Kids Health » Claire Holt Approaches Motherhood Just Like the Rest of Us: By ‘Winging It’ & Eating Her Feelings

Claire Holt Approaches Motherhood Just Like the Rest of Us: By ‘Winging It’ & Eating Her Feelings

Claire Holt may be an internationally famous actress, but at the end of the day, she’s completely relatable — especially when it comes to being a mother.

During an exclusive interview with SheKnows at the WWD Apparel & Retail CEO Summit, Holt shared how she’s managing life as mama to her two kids, son James, 3, and daughter Elle, 2. Proving she’s just like the rest of us, the actress said the biggest surprise of motherhood is “That no one knows what they’re doing, and we’re all just winging it.”

She continued, “Everyone looks like they’re got their life together on social media and everything, but at the end of the day, you know, it’s really hard and you have to admit that it’s difficult and rely on other people — you don’t have to do it on your own. Life is a lot easier when you’re real about that and you ask for help, I think.”

On days that she feels especially overwhelmed with parenting duties, Holt said she loves to run. While some people can surely relate to her using exercise as a way to destress, nearly everyone can relate to her admission that she loves to eat, too. With a laugh, she said, “Just eat my feelings, that’s what I do.”

After recounting her love for style icons Cate Blanchett and Stella McCartney, she made herself a known kindred spirit once again by saying, “There are just so many upcoming designers and fashion icons that I try to emulate and I look up to, and you know, when I’m awake very early in the morning with my kids, I think, ‘One day, I’m going to be put together like that.’” We, too, strive for that one glorious day. Until then, sweat pants, mismatched socks, and a claw clip it is — it doesn’t get any more relatable than that.

These celebrity moms make us all feel better when they share the highs and lows of parenting. 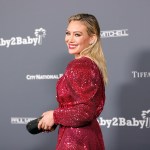