Home » Kids Health » From doing odd jobs to riding bikes, this mom did it all to educate her child

From doing odd jobs to riding bikes, this mom did it all to educate her child 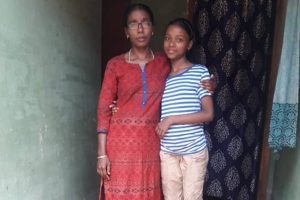 Meet Pinky Malakar from Assam, whose only dream was to send her daughter to an English medium school. Despite financial constraints, the mother, who now works for a bike app, is doing it all to make sure her daughter's education is not compromised. Pinky Malakar found out about a bike app service while talking to her friends one day. The 34-year-old mother from Guwahati, who was looking for a job, asked if she could work there but was laughed at. “Such jobs are not meant for women,” she was told.

On February 6, 2019, Pinky walked into the Rapido (bike app) office to enquire for a job. “I have been riding a bike since I was 15-16. So, I was intrigued and curious to know what it exactly was that made it ‘unsuitable’ for women,” Pinky told Express Parenting. “The staff at the app office encouraged me to join. I agreed; my profile was ready in an hour but I could not muster the courage to start,” she recalled.

It was on the day of Saraswati Puja, on February 10 that things took a turn. “There wasn’t a single paisa in the house. My daughter was craving some good food but I had no means. Suddenly, I remembered about the bike app and thought of taking a couple of rides so that I could get something for her with the money. I borrowed money from my neighbour for petrol and completed five trips that day,” she said.

Also Read| How a mother, who grew up in an abusive household, is teaching her son about gender equality

Pinky is currently the sole earner in her family-of-three. Initially, she worked with some NGOs. She joined Uber Eats last year and is now working for the app along with Rapido. Her husband, who had been employed as a driver, is physically unfit to work now. Despite financial constraints, Pinky made sure her nine-year-old daughter, now in class 4, was not deprived of proper education. “My parents never really stressed on my education. Studies never really mattered, let alone pursuing a career. As a young girl, I had decided that when I get married, I will have a single child and will make sure he or she gets proper education. And I think my dream came true when I put my daughter in a good English medium school. Yes, the expenses are beyond our means but I don’t want to step back. This has been my only dream,” said the mother.

The road to fulfilling the dream, however, has been not easy for Pinky or her daughter. Couple of years ago, Pinky left her husband’s house to stay with her mother. “That did not turn out well because I have always been very independent as a person. So, I left my maternal home too. I had no money when I left. In a few days, I set up a small panwadi. My daughter would sit with me at the shop after school since there was nowhere I could send her,” she recalled.

An employee from the school finally got her a job as a cook at a teacher’s house. The teacher recommended her to a couple of her colleagues too. Meanwhile, her daughter’s academics began to suffer. She was then in her first standard. “At that time, I could only think of ways for us to survive and so, I could not focus on my daughter’s studies. The teacher whose house I worked at suggested giving tuitions to my daughter. She has been studying there since then, free of cost. In all these years, I have never skipped work at this teacher’s house. She helped me in my worst situation and I will always remained indebted to her,” Pinky expressed.

Financial problems aside, Pinky also has to fight sexism on a daily basis. “Where I come from, a woman wearing a helmet and riding a bike or simply being independent is still unheard of and censured. As a woman, you are expected to get married, have children and take care of your husband. Any woman who deviates from this role is a threat and makes people uncomfortable. I have been told to marry my daughter off as early as possible. But how do I make them understand that my daughter is an integral part of me and not some burden? And that’s why I don’t take her to my village, only to protect her from this mindset,” the mother said.

‘I tell my daughter she is no less than a boy’

In her parenting style, Pinky is making sure her daughter grows up to be a woman not bowed down by society and is able to make choices in life. She tells her daughter that she can live her life on her own terms. “I tell my daughter that no matter what people say, she is no less than a boy. One day, she will grow up to be successful and will make her mother proud,” she said.

Pinky now lives with her husband and daughter. “A separated, single mother is still a taboo. So, my husband and I are living together now. My daughter understands our situation. But she knows I am there for her all the time,” Pinky signed off.