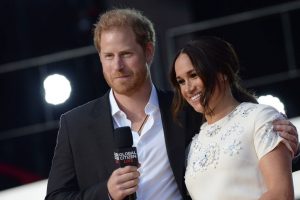 Playdates are the perfect way to get to know other parents — and it’s a strategy that works for royals too! Prince Harry and Meghan Markle recently invited over a famous celebrity friend and his kids for a playdate in their mansion, and it sounds so awesome.

The friend in question? James Corden! The British actor and host of The Late Late Show recently revealed that he is friends with Prince Harry, according to The Sun. The outlet reported that Corden and his kids, Max, 11, Carey, 7, and Charlotte, 4, whom he shares with wife Julia Carey, have had playdates at the royals’ home with their kids, Archie, 3, and Lilibet, 11 months old.

“I have,” Corden told The Sun, when asked if he’d been by the Duke of Sussex and his wife’s mansion. “It was more a sort of playdate scenario [with the kids],” he added. “Then we went out for dinner after, it was lovely. Obviously I’m not telling you any more. Obviously.”

OK! Magazine tweeted a picture of the two hanging out, and it looks like they’re deep in conversation.

The two men have had a friendly rapport before, like when Corden interviewed Prince Harry on The Late Late Show in Feb. 2021. They drank tea on the top of a bus while cruising around L.A. At the time, Corden jokingly suggested “the perfect house” for Prince Harry: “The house from The Fresh Prince of Bel-Air.” They walked up to admire it and Prince Harry proceeded to rap the theme song.

Apparently, the two are still friends, as Corden told The Sun how much he likes Harry and Meghan. “Look, I’m a huge fan of both of them,” he said. “Obviously I know Harry better than I know Meghan but I think it’s really hard to judge, or be judgmental.”

Prince Harry and Meghan Markle have been living in California since March 2020, and they’ve stayed in touch with Prince William, Duchess Kate Middleton, and their children. Corden has been in LA since 2015, when he first starting hosting The Late Late Show. According to The Sun, the two live about 90 minutes away from each other.

Corden also told The Sun, “I have a huge amount of respect and admiration for Harry, and anyone who has been around him and spent time with him would feel exactly the same way.” Corden added, “I think he is a devoted and loving husband and father and I think what they have done [in turning away from royal life] is incredibly brave and I’ll always be in their corner. I have nothing but admiration and respect for them. I think it’s impossible to judge any of it really.”

How can we get an invite to their next playdate? The two are probably making everyone laugh the entire time.

See the meaning of our favorite royal baby names from around the world.