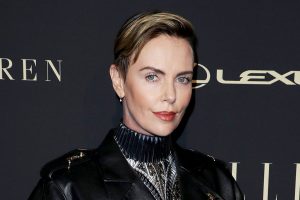 Charlize Theron is teaching her children what’s important in life.

“A big thing for me is kindness,” the actress, 44, told Us Weekly and other reporters on Monday, October 14, at the 26th Annual ELLE Women in Hollywood Celebration. “We kind of live by our religion, which [says], ‘Do unto others the way you want to be done to you.’ We’re big on respect and thinking about others before we think about ourselves.”

Not only does the Oscar winner have Jackson, 7, and August, 4, at home, but she also recently adopted two puppies and admitted she’s struggling to balance it all with her career.

“My life is a little overwhelmed,” the Bombshell star told Us. “I just had three surgeries. I’m promoting two films. … We don’t have a nanny right now and I know that I couldn’t do what I do and have this career if I didn’t have help and support.” (Theron recently tore a ligament off of a bone in her hand while filming an action movie).

The Golden Globe winner explained, “Every single person in my life who is like my family has just stepped in and it’s really meant a lot to me. Tonight I was literally, like, writing [while] a friend of mine was watching the puppies. My mom is cooking dinner for the kids right now.”

In May 2018, Theron told Elle about how much her mom, Gerda Martiz, has been there for her since she adopted Jackson and August. “I knew that I would have to have my mom help me if I was going to do this as a single parent,” the producer told the outlet. “To not acknowledge her in coparenting my children would be a lie . . . I would feel pretty alone if I didn’t have a partner in crime in all of this.”

That being said, Theron didn’t always feel that way about accepting help from Maritz. “In the beginning, I wanted to do it all and didn’t reach out for as much help as I actually needed,” she admitted at the time. “I felt, ‘If I don’t do all of this, then maybe I am a bad parent. The second time, I realized I am happier and my kids are happier if I ask for more help. People think I have a staff of 40, but I don’t.”

With reporting by Carly Sloane

Teaching kids the importance of an apology