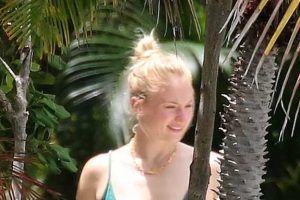 Sophie Turner lives her life like winter is never coming — which is what helps the Game of Thrones star stay bikini-ready. Though her acting jobs require her to be in tip-top shape (she also led Dark Phoenix as X-Men action hero Jean Grey), Turner says she would keep up her fitness regimen regardless.

The British star revealed that she really got into exercising before she began filming 2016’s X-Men: Apocalypse. “During the shoot I went hard,” she told Self at the time. “And that hasn’t stopped.” At the time, she was doing hour-long workouts six days a week — even though she was consistently working 13-hour days.

Turner was set up with celebrity trainer James Farmer when she started the project. Even before he designed a fitness regimen for her, he changed her diet. “When I first met Sophie, she didn’t eat breakfast, which is a common mistake,” he told the mag. “And I didn’t think she was eating enough of the right foods. So I made sure she had a good source of protein and healthy fats with every meal, plus lots of fibrous vegetables like spinach and cauliflower.” In general, he described the plan as a “low-carb, Paleo-style plan,” focusing on lean meats, nuts, fruits and vegetables. Turner loves to eat lean. “I’ve really embraced healthy eating. It makes you feel a lot better and more energetic. I’m inspired to get up and out,” she told Self.

For her workouts, she goes full-body, incorporating activities like hill sprints with strengthening exercises like kettlebell lifts and resistance bands. There are plenty of body weight and equipment-free moves, too, including burpees. And she prefers a high-intensity group workout to something more low-key. Above all, Turner stays active in daily life — preferring to get around cities with her husband Joe Jonas on a bicycle rather than taking a cab and playing tennis on their honeymoon. As she’s said, “exercise has made me feel more positive about my body, less self-conscious.”

Scroll through to see how her wellness plan pays off and get more tips!

It’s Not Too Late to Tone for Summer! Try These ‘Revenge Body’ Pro Tips
6, a, Bikini, body, days', does, for, Out, shows, Sophie, Turner, week, what, working
Latest Posts