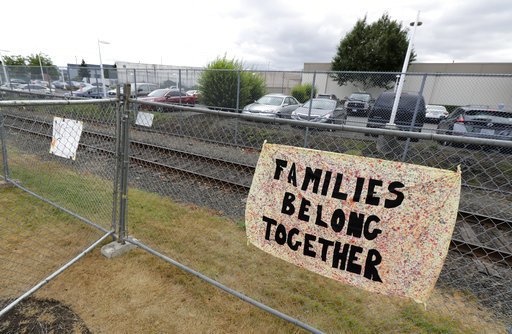 The Trump administration’s use of DNA testing to match migrant children separated from their parents is justifiable as a last resort, medical experts say, but raises a host of ethical problems.

That includes the risk of damaging the family fabric by revealing that an adult thought to be the biological parent really is not.

A federal judge in California on Tuesday said DNA testing should be limited to cases in which the parent-child relationship can’t be established through documents such as birth certificates and passports.

The government had argued that DNA testing is faster than authenticating documents, and protects children—especially the youngest—from being handed to someone who may not be their biological parent.

Officials said testing on 102 migrant children under 5 years old revealed five cases in which adults claiming to be the parent actually were not, including two in which the results came as a surprise to the adults.

DNA testing “is one of the few tools to fix this miserable mess,” said Arthur Caplan, head of the division of medical ethics at the New York University School of Medicine. “But it would be the height of irresponsibility to do it without competent counselors used to dealing with these kinds of genetic discoveries.”

Thomas Murray, president emeritus of the Hastings Center, said “misattributed” fatherhood, and even motherhood, is more common than most people realize.

DNA testing is ideal for determining biological parenthood, but “a direct genetic tie is not the only—or even in all cases the best way—of determining who is genuinely in caring parental relationship with a child,” Murray said. The Hastings Center is a bioethics research institute.

“This could actually hurt the child,” Murray added.

Nothing could be further from the government’s intent, said Chris Meekins, a senior Health and Human Services Department official helping to oversee the court-ordered reunification of more than 2,000 children separated from their parents at the border.

Not only is DNA testing fast, taking about a week, but Meekins said it also protects children from being returned to someone who may not be their parent, and could do them harm. Background checks on parents in immigration custody have turned up eight cases of people with serious criminal violations, and one credible allegation of child abuse, he said.

“HHS could have transferred every child out of their care to a parent currently in (immigration) custody if we did not take into account child safety,” said Meekins.

“Our process may not be as quick as some would like, but there is no question it is protecting children,” Meekins added.

But U.S. District Judge Dana Sabraw in San Diego said Tuesday the practice should be curtailed.

The judge said DNA testing needed to be done only when parent-child relationships can’t be proven through birth certificates or other ways, casting aside the government’s position that all parents and children should be tested.

Sabraw, who ordered the reunification of families, said the government can use DNA testing but solely when necessary and with parental consent. Samples should be destroyed in seven days and not used for any other purpose.

Ethicists say the government’s DNA testing also raises questions of privacy, informed consent and whether counseling is provided to families when the tests reveal unexpected results.

“Non-paternity problems can play out in all kinds of ways,” said Caplan. Kids “may say, ‘You’re not my dad, but I want to find out who is my dad.'”

ACLU lawyer Lee Gelernt said DNA testing in every case simply is not needed. What about adoptive parents, he asked?

“The DNA is not conclusive,” he said.

Seattle lawyer Janet Gwilym, who has long worked with refugees, said it’s not that unusual to find an adult caring for a child who is not theirs.

“In the chaos of war or unpredictable situations, other people will take a child in and raise them as their own,” said Gwilym, with Kids in Need of Defense.

She recalled a married couple from Ethiopia, whom she’d represented years ago. They took in and raised an infant, but when they became refugees they could not prove legal parentage, so the family was separated. Among the complications: The building where they’d tried to register legal papers burned down.