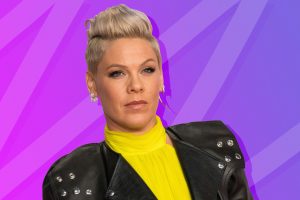 A handful of celebrities have been vocal about abolishing gender stereotypes for their kids. Recently, actress Kate Hudson and singer Pink have each claimed to be raising their children “gender-neutral,” though both have since clarified that they take a traditional approach to pronouns. “Gender-neutral is in itself a label and I’m label-less,” said Pink in 2018. So, wait: Are these celebs really raising their kids gender-neutral? Is anyone? Is ‘gender-neutral’ parenting even possible? Are we truly witnessing the dawn of the “theybie” era? We have so many questions.

For the uninitiated, “theybie” is a playful term for taking a gender-neutral approach to parenting. If you’re raising a theybie, the idea is to allow your child to follow their own interests and, ultimately, let them choose who they will be in all ways, including how they will express their gender.

Remember way back when in 2012, when Celine Dion famously ruffled feathers of French Canadians by letting her sons have long hair? And just this month, rumors were swirling about the future Baby Sussex, as Vanity Fair reported that Meghan Markle and Prince Harry were going to take a “fluid” approach to gender. (The Royal Family almost immediately doused this rumor with a statement calling it “totally false.”) Along with Kate Hudson, Pink, and others in the limelight, these slant attempts at gender-neutral or gender-fluid parenting are the ones that make headlines in Hollywood and Buckingham Palace, but the overall sample size of true, hardcore “theybie” parents remains quite small. Still, increasingly, millennial parents are approaching child-rearing with more flexible ideas about gender than previous generations held.

“How do we prevent our children from falling into oversimplified brackets, brackets that are really just created for marketing purposes?” asked actress Olivia Wilde in a 2018 essay.

Abolishing harmful stereotypes is one thing, but why remove gender altogether? Isn’t that extreme? Overriding our society’s devotion to gendering may seem like too much work for many, especially those without the bandwidth or access to resources to lighten their child-rearing burden. For some, however, giving your child a gender-free early life is a way to give them a blank slate for expectations about who they are. Which is a radical choice, as gender-coding starts almost at conception.

“There’s evidence that kids as early as eighteen months have the basic conceptions of gender and gender grooming,” says gender researcher Lisa M. Dinella. “It starts with recognition of two groups of genders. It moves on into stages of recognizing one’s own gender and one’s own group.”

Dinella is a professor of psychology and director of gender studies at Monmouth University. Her research focuses on children’s early play experiences. One way gender is expressed to children at a very young age is through media; another is through gendered toys.

Toys and media teach kids academic lessons and life lessons, says Dinella. And regardless of their intention, the gendered colors and messages of toys and media can tell a child “this isn’t for you.”

Dinella’s team did a study on “propulsion” toys — toys that have wheels and move, the types of things we tend to think boys just naturally like more than girls. When they painted all of the toys white, which children wanted to play with them substantially changed, suggesting that color cues play a big role in whether a girl will choose to play with certain toys.

Toys and play are just one small example of ways in which gender coding not only affects a child’s self-image, but also forecloses entire types of learning, play opportunities and skill-building. Research has further shown that adults speak to babies in different ways depending on their gender. In a filmed experiment, observers swapped babies’ clothing and recorded how adults treatment toward the children changed based on perceptions of their gender. One of the adults is amazed by her own behavior, remarking that even though she thought she had an open mind, subconsciously she thought about the child differently when she thought they were a boy.

One of the things that surprised Ashlee Dean Wells about raising her child gender-free was how many adults seemed incapable of wrapping their heads around the concept. In her essay for Upworthy, she wrote she “had multiple people tell me that they simply don’t know how to talk to [her child] without first knowing their gender.”

Bottom line is, if you embark on “theybie” parenting, whether you’re a celebrity or not, you will encounter the discomfort of others who don’t understand the harm gender stereotypes do — or who just don’t think its worth the trouble to remove gender. Yet all this pushback raises the question of why the supposed gender of babies is so important to us in the first place — and what message we are trying to tell our kids and ourselves when we put a baby girl in a pink dress, or give a boy building blocks to play with.

“Our world would be better served if all our kids were learning all kids of lessons and were getting a well-rounded and multi-faceted experience when they’re young,” says Lisa Dinella. “That’s what childhood should be about: our goal should be that kids have joyful and rich learning experiences in their childhood, and not to have that be limited or narrowed by their gender.”

Are Digital Nomad Parents Robbing Kids of a 'Real' Childhood?

No, Kate Hudson Is Not Actually Raising Her Daughter 'Genderless'

Meghan Markle & Prince Harry Are So Excited to Raise a Feminist
are, Celebs, gender, kids, Neutral', raising, These
Latest Posts