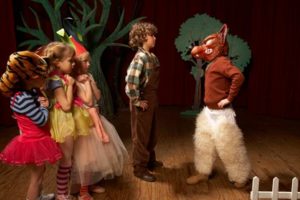 World Theatre Day: "Most children attempt to compose some form of poetry. Those exposed to plays and inspired by them may feel the urge to write for themselves. Exposure and the desire to create are essential; other things, such as training and talent will help the process along."

On the occasion of World Theatre Day, Express Parenting got in touch with Manjima Chatterjee, Coordinator of Art Programme at Shiv Nadar School, Noida, to know why children should be encouraged to take an interest in Performing Arts, which includes creative activity performed in front of an audience, from drama to dance.

Here are excerpts from the conversation:

What skills can children learn from Performing Arts?

Performing Arts can teach a child many skills apart from the core skills involved in the actual practice of music, dance and drama, such as how to play an instrument, make a specific gesture or express a particular emotion.

As a part of the process of engaging with the Performing Arts, learners use their entire bodies, and not just one or two senses, to learn to make connections and discover universal meanings and emotions. They learn to connect with the traditional learning of a particular geographical area and to engage objectively with the context of the pieces they explore. They learn to ask questions from within the context while appreciating the content on its own terms. They learn to work with each other in a group, allowing for the shifting of focus away from them and back to them, which is both humbling and gratifying, and teaches them to respect the presence of everyone they work with.

Performing Arts allow the possibility of engaging with a different social order — one that is based on talent and not on the circumstances of one’s birth. Much of the Arts is about articulating the unspoken, which helps learners come into contact with their inner selves as well as to empathise with others facing similar situations or challenges. It is well-known that music — essential to both dance and drama — helps to build logical and analytical skills as well as an understanding of patterns in the world. The Performing Arts space is one which teaches learners to take risks and to take decisions on the spot, as well as to “edit” their performances for the sake of aesthetics. I would say that finally, the Performing Arts teach learners — as well as the audience — to “know” the world in a way that no amount of academic learning can, by uniting the body and mind in an undifferentiated whole.

Yes, of course, for the reasons outlined above.

How can Performing Arts impact a child’s overall learning process?

According to the UNESCO Education Report 1996, there are four pillars on which education should be founded:

Learning how to know (knowledge and understanding of the world): Students learn how to learn by exercising their imagination, their attention, their memory and their way of thinking.

Learning how to act (skills acquisition): Students put their knowledge into practice while developing their abilities to communicate, to work with others and to solve conflicts.

Learning how to live together (communicative skills): Students learn how to empathise, how to overcome prejudices and how to communicate their thoughts and feelings to others, from respect and understanding towards other ways of thinking and living.

Learning how to be (emotional education): Students develop all their potential as human beings: as individuals and as members of a family and of a community.

According to this report, the values and attitudes that education needs to confer are: freedom to think, freedom to voice opinions, and freedom to feel and to create. All of these are encouraged in a regular classroom, but are often difficult to bring about. All of these are possible in, and are essential aspects of, Performing Arts classes.

How can parents encourage kids to take an interest in Performing Arts?

In my experience, most children are interested in the Performing Arts (PA), since they are about expressing themselves, which children love to do. Left to themselves, most children learn in the PA way. It is adults who insist that there is only one way of learning — the intellectual way, which does not require the body or emotions to participate. Education is, more often than not, a process by which we lose touch with ourselves and gain empty knowledge which does not serve us in engaging with the world. The best way to encourage children is to let them be, and to give them exposure to the Performing Arts. Take them to enough plays, to concerts, to exhibitions. Children will find their own path by seeking their own learning.

How can kids be encouraged to write plays?

The same is true for writing plays. Most children attempt to compose some form of poetry. Those exposed to plays and inspired by them may feel the urge to write for themselves. Exposure and the desire to create are essential; other things, such as training and talent will help the process along.

What sort of involvement is expected of parents if their child is interested in Performing Arts?

In urban India, parents usually get their children trained in one or the other form of Performing Arts, wherever possible. I know a lot of parents who spend a lot of their free time escorting their children to various PA classes through the week, and that’s a great thing, because most schools unfortunately don’t have a robust PA programme. What would be great, though, is for a child interested in PA, for the parent to learn a bit herself or himself, in order to be able to engage in a creative way with their learning. Most importantly, and I know I’m repeating this, take your child to a play or a concert. The more they watch, the more they learn, as do you.

What are some of the popular themes in theatre that children are exploring nowadays?

Children are interested in the world, so some themes will be eternally popular. In recent times, though, children seem to be very interested in Artificial Intelligence and ecological challenges as themes.

If a child plans to put up a skit at home, what are the five tips you would like to give?

1. Think about the central theme of your skit. The design should be such that it provokes your audience to think, and not one where you provide all the questions as well as the answers.

2. Remember a play is watched as well as heard. Pay attention to actions, which often speak louder than words.

3. Balance the presentation of emotions. Too much of one thing can go against you, even humour, unless it is balanced by its opposite.

5. As important as the script is, leave some elbow space for improvisation. The best moments in a play come from the magic that happens on stage!

Being Baba: What’s the one good reason to have a baby?