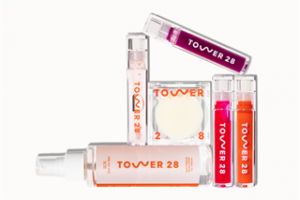 Tower 28, the clean beauty company that launched in April, will be sold in 500 Sephora stores nationwide and in Canada on Jan. 17.
“One of the things I really wanted was for our products to be really accessible,” shared founder Amy Liu on a morning in Los Angeles. “To me, part of that is retail and not just direct-to-consumer.”
The young brand has been available on sephora.com since September and can also be found online at Credo Beauty and Revolve. The latter two, respectively, have offered a clean beauty audience and a Millennial, influencer-driven world, she said, while “Sephora was really about brand building, critical mass. They really know how to build businesses. Sephora has been huge for us.”
Liu, a California native and graduate of business school at the University of Southern California, was already familiar with the workings of the beauty industry. She began her professional career as director of international marketing at Smashbox Beauty Cosmetics before joining Kate Somerville and Josie Maran Cosmetics as head of marketing. Along the way she became a mother, then worked in consulting until about a year and a half ago, when she began raising funds (investments from family and friends) for what would become Tower 28, named after the Santa Monica, Calif., lifeguard tower.
"That’s how people find each other at the beach, and it’s also an obvious sign of safety," she said. Liu, who has eczema, started the brand to create cosmetic products that are nontoxic and nonirritating: "Having to be in front of people and talking about beauty, I was always self-conscious about my skin. Ironically, you want to wear makeup, because you want to cover it up. I felt like there was a lot of products available for sensitive skin in skin care but not necessarily in color. And a lot of the products for sensitive skin weren’t nontoxic, and products that were nontoxic weren’t great for sensitive skin, because they had essential oils and things like that. I felt like it was something I could do.”
By the end of 2019, sales for Tower 28 will be between $300,000 and $400,000, while next year, sales are expected to reach between $2 million and $3 million, according to industry sources. “We’ve sold 10,000 lip jellies, which is crazy to me,” Liu said of the brand's gloss, made with oils.
Tower 28, much like Glossier, embraces the dewy, high-shine trend. Everything sold at Tower 28 is priced at $28 or under. “I wanted it to be clean beauty that’s affordable,” Liu said. “It’s made to be fun and colorful and juicy. I wanted it to be appealing.”
Along with the $14 “ShineOn Lip Jelly” gloss — which first launched in clear and now comes in color — Liu released an $18 “SuperDew Highlighter Balm,” a multipurpose glossy balm; a $20 “BeachPlease Luminous Tinted Bal,” a pigmented balm in various shades for cheeks and lips, and a $28 “SOS Daily Rescue Facial Spray,” a hypochlorous acid-based skin-care item aimed at soothing and repairing skin that has helped Liu with her eczema, she said.
“SOS is 100 percent natural, clinically proven,” Liu said. The spray, along with the glosses and highlighter balm, will be among the selection found inside Sephora stores as part of the retailer’s clean beauty initiative. “It’s gentle, easy, low on ingredients, but it works."
All products are vegan and cruelty-free, but “not 100 percent natural," she said. "I don’t have a problem with synthetics. I just don’t want it to be bad for you.”
Next, the brand will release a $20 “glowing” bronzer in multiple shades.
“Frankly, it’s because people asked us for it,” Liu said of her “small but growing and engaged” Instagram audience. Tower 28 has close to 18,000 followers on the social media platform. "We make sure we’re talking to our consumers."
Source: Read Full Article

EXCLUSIVE: Thrive Causemetics to be Sold at Ulta Beauty