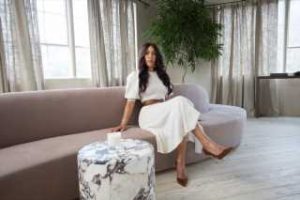 Shani Darden, the eponymous skin-care brand, has landed two investors and hired a chief executive officer.
The line was founded by aesthetician Shani Darden with a product called Retinol Reform, selling for $95, in 2013. That product generated significant buzz online, which has continued due to Darden's client roster: She works with Jessica Alba and Chrissy Teigen, for example.
Now Darden has received a seed investment from BAM Ventures, the fund of serial entrepreneur Brian Lee, whom she met through Alba, and Beechwood Capital, an early investor in Tatcha (which was just sold to Unilever for nearly $500 million). Terms of the deal were not disclosed, but industry sources said Darden's brand is on track to do $5 million in sales for the year.
She now has five products — Daily Cleansing Serum, $38; Daily Toning Essence, $52; Daily Oil-Free Moisturizer, $42, and Texture Reform, $95.
In addition to raising capital, Darden has hired Jessica Goldin as ceo. Goldin was previously the senior vice president of marketing for Beautycounter. She has also worked at Murad, Clinique and Victoria's Secret Beauty.
At Shani Darden, Goldin is tasked with overseeing business development, which will include building out the product line, expanding distribution and making key hires to build up the team — which right now has four people, Goldin said.
The brand's sales are primarily generated from the web site, Goldin said, but Shani Darden products are also sold with Cult Beauty and Net-a-porter. "As the brand has grown, we've been approached by a host of different retailers. We're in discussions with a leading retailer right now for next year," Goldin said, declining to specify which retailer.
She met Darden about four years ago when she moved to Los Angeles, Goldin said, and was intrigued by the idea of an expert-influencer. "It's rare to have somebody who is both an influencer, but first and foremost, she's a skin-care expert and a practitioner to all the A-list celebrities in Hollywood," Goldin said. Beyond her celebrity clients, Darden has 187,000 followers on Instagram.
Since Retinol Reform launched, Darden has worked on products that aim to meet the needs of her clients, she said. "I wanted to make that I felt were missing, at least with the products I was using," Darden said. "It's a gradual growth for me in terms of putting out products I believe in."
"Because I work with other brands, there might be something I'm seeing from another brand where I'm like, 'oh, if it only did that,' or if a client said, 'I like this, but I wish it did this,' and then I go from there," Darden said. She declined to provide specifics on upcoming products, but did say she's open to developing further retinol options.
To date, many of Darden's clients have served as key marketing partners. "I gift stuff when I launch a product to my actual clients. I haven't paid anyone and I don't really work with anyone, I'm just lucky that I have really great clients. Some are influencers, it's all been very organic for me," Darden said.
Source: Read Full Article

Family Recipes Are the Secret Behind Aavrani Skin Care