Taylor Swift's Hair Is the Star of Her New Music Video 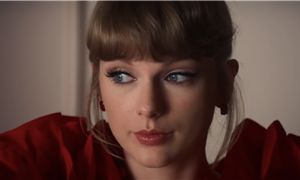 Taylor Swift has been working hard to promote the remake of her wonderful 2012 album Red. In an attempt to gain control of her masters, the perpetually lovestruck singer re-recorded songs from the album as well as creating new hits for Swifties to fawn over. The remake dropped on November 12, 2021, to the delight of fans with a 15-minute short film for the song "All Too Well," which was on the original 2012 album, featuring actors Sadie Sink and Dylan O'Brien as a couple with a deteriorating relationship.

The second music video from the catalog is for a song titled "I Bet You Think About Me," which premiered on November 15. A day prior to the video dropping, the Pennslyvania-born singer revealed in a TikTok video that actor Blake Lively was directing the video.

The video features actor Miles Teller, who plays Swift's former lover about to get married to another woman. Throughout the video, Swift is dressed in all-red outfits, which makes sense given the album's name, which directly contrast with the white clothing of all the guests. In addition to these vibrant outfits, Swift shows off six stunning different hairstyles that feature her blonde hair in ponytails, slicked-back updos, and lovely curls. In case you missed any of them, we've got them all below.

Swept to the Side

The video opens on Teller practicing his wedding vows in the bathroom before transitioning to a scene at the wedding, in which Swift is walking around in a blood-red, two-piece outfit. Swift looks gorgeous in this fiery outfit, but we're more concerned with her sleek ponytail accessorized with a red hat. Her dirty-blonde hair is pulled back into a high ponytail with the wavy tendrils flowing behind her. The front of her hair is swept to the side for a fantastic bayang and rolled up towards the end. The small red hat sits slanted, right behind her rolled hair, adding the perfect finishing touch to the all-over red outfit.

In the next scene, Swift is standing near an ornate wedding cake in a red dress with large, poofy, floral sleeves. She's engaging in a little mischief by knocking down one of the cake toppers and running her fingers through the frosting while a young girl watches and eventually joins her. For this look, she opted for a high, braided ponytail with her full fringe on display. Her blunt bangs have a slight wave to them, which we think works well with the voluminous braid. In front of either ear, longer pieces of hair were slightly curled at the end to frame her face.

Slicked back hair seems to be a theme in this music video because in the following scene, Swift appears to be giving a speech to the newly wedded couple in a scarlet pantsuit with a low ponytail. The low pony isn't the only star of the show here; Swift took a trip down memory lane and adopted a poof at the crown of her head. The wavy ponytail sits at the base of her neck with pieces of hair wrapped around the base.

For the Love of Florals

Swift's mischievous ways continue in the next scene as she plays around with kids with two red-and-white straws in her mouth. Her caramel-blonde hair flows in half-up style with loose waves all around her head with bangs that reach her eyebrows. If you look closely, you'll notice the red ribbon behind the flower crown that ties the tiny ponytail. While we love how laid-back this hair looks, we especially appreciate the red flower crown that sits right behind her bangs.

In the next scene, Swift wears a strapless wedding dress while dancing and sharing an intimate moment with Teller. To complement her bridal gown, her hair is styled into a chic chignon at the back of her head. Her bangs are straight with a bump at the end while the pieces on the side flow in uniform curls. It's hard to see all the details here as the duo sways around the floor in darkness, but it looks like a little poof was added to this lovely updo as well.

Letting It All Out

In one of the final scenes, Swift walks away from Teller in the white wedding dress, and we see it transform into a stunning red gown. As the dress transitions, so does her hair. She pulls her blonde hair from the bun and lets it fall around her in loose curls as she sings her heart out and strums along on a red guitar. Her side-swept fringe looks marvelous as she sways and performs.

This new song is clearly a great addition to the album, but the visual components are just as good. Besides telling a story, Swift gave her devout fans plenty of hair inspiration for weddings, a night out with friends, or any other occasion.

Saweetie Swapped Her Signature Blonde for a Fresh Copper Shade