Can cancer break your heart? One in 6 ‘broken heart syndrome’ patients have had the disease – and are more likely to die within five years, study finds

Cancer might literally break your heart, a new study hints.

So-called ‘broken heart syndrome’, or stress cardiomyopathy, develops when the body is under such intense pressure that it disrupts the function of one part of the heart, and forces the rest to pump harder to compensate.

A new international study, published in the Journal of the American Heart Association found that one in six broken heart syndrome patients also have cancer or a history of the disease.

Often, broken heart syndrome comes on following an emotional trigger, like a spouse’s death – but those who had had cancer were less likely to have such immediate traumatic events.

And patients plagued by both conditions are far more likely to die within five years of diagnosis than are patients who only have ‘broken’ hearts. 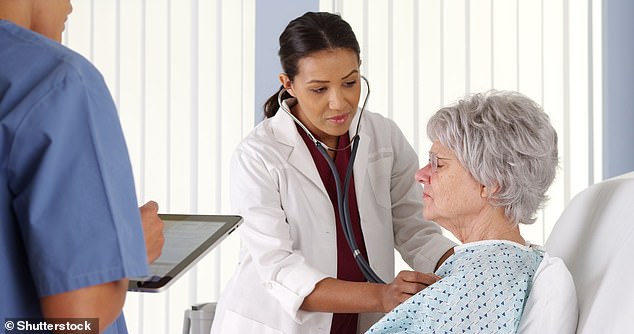 Cancer may play a role in ‘breaking’ hearts, suggests Swiss research that found one in six stress cardiomyopathy patients has had the disease

Although people have written about ‘heartbreak’ for far longer, the actual broken heart syndrome wasn’t discovered until the 1990s.

Before then, doctors had largely dismissed the idea that an emotionally or physically traumatic even could actually damage the muscle.

Now, some 1.2 million Americans are estimated to suffer broken heart syndrome every year.

Also called ‘taksubo cardiomyopathy,’ this temporary but life-threatening heart condition is typically triggered by stress, which then causes the organ to contort.

Although it’s best known as ‘broken heart syndrome,’ the condition also has another two names: Stress cardiomyopathy and taksubo syndrome.

The latter name comes from the shape the heart takes during an episode of ‘heartbreak.’

The left pumping chamber of the heart stretches outward like a balloon, while the base of the muscle inverts, pulling inward.

The combined effect renders the heart too weak to pump blood properly.

And, according to the Japanese scientists that first discovered the phenomenon, the contorted heart resembles a ‘taksubo,’ an octopus-catching pot.

The sudden heart syndrome causes symptoms similar to those of a heart attack, like chest pain and shortness of breathe.

But it tends to happen after shocks, like physical injury or infection or the news of a loved one’s death.

Scientists think that a sudden influx of stress hormones like adrenaline and cortisol cause the heart to go haywire.

The condition strikes over one million in the US a year, and is life-threatening.

Its main left chamber enlarges and stretches outward while the bottom inverts inward, taking on the shape of its namesake taksubo pot, a vessel used to trap octopus in Japan, where the condition was first identified.

While contorted this way, the left side of the heart muscle can’t properly contract to pump blood.

That leaves the rest of the heart to work extra hard and the over-exertion can cause weakness shortness of breathe and chest pain.

Its symptoms closely resemble those of a heart attack, but exactly what or why broken heart syndrome occurs remains a bit of a mystery.

Scientists suspect that the organ gets flooded by stress hormones like cortisol and adrenaline and falters under the sudden inundation of these stimulating compounds.

Occasionally, the rare phenomenon occurs without a clear trigger but, typically, it’s prompted by a catastrophically stressful event.

These can be purely physical, such as infection, injury, psychiatric or neurological disorders or surgery.

But the syndrome is better known for coming on in the aftermath of an emotional shock, like natural disasters, the unexpected death of a loved one, arguments, financial losses or breakups.

Occasionally, the condition has even been triggered by positive, unexpected events, like surprise parties.

Past research suggested that patients with broken heart syndrome might have worse odds and more complications if they’d already suffered cancer.

But beyond that, broken heart patients don’t tend to have as many of the typical risk factors for heart conditions.

The researchers analyzed data on over 1,600 broken heart patients and found that one in six of them had a history of cancer.

Those patients with a history of cancer had poorer long-term survival odds, and were at a greater risk of dying within just five years.

Furthermore, rates of psychiatric and psychological distress were about the same in both the group that had had cancer and the one that hadn’t.

But fewer of the patients that had had both cancer and broken heart syndrome developed the latter following an emotional trigger.

Taken together, the results suggested to the study authors that broken heart syndrome might, in a way, be a complication of cancer.

In other words, they posited that it might be a paraneoplastic syndrome, or a set of symptoms that come on as the result of cancer, even after cancer itself is no longer present.