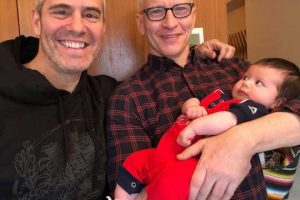 On Monday's episode of his SiriusXM Radio Andy show, Cohen revealed that his 15-month-old son Benjamin Allen's childcare provider had recently left to help out good friend Anderson Cooper with his newborn baby boy Wyatt Morgan, whom the CNN anchor welcomed via surrogate on April 27.

"I've been talking about my nanny [saying] she's leaving, that she's gonna go help out a friend, and the moment Anderson announced it I got a bunch of DMs from eagle-eared Radio Andy listeners saying, 'Wait … is that where your nanny went?' The answer is yes, that is where my nanny went," said Cohen, 51.

"We had long planned this transition, but I certainly didn't expect it to happen during a quarantine, of course," he added. "So we had to really handle this hand-off from one home to the next very carefully, but we did and she is now with Anderson and I know she's gonna get Wyatt on a great sleep schedule just like she got Ben."

"I'm so happy for Anderson," the Watch What Happens Live host continued. "We've been talking about this for a long time and I have been really enjoying Anderson coming over. His visits with Ben have taken on a special significance since we both knew for a while that Anderson was planning on [becoming a dad] himself." Cooper, 52, announced Wyatt's birth on Thursday's episode of his show Anderson Cooper 360°, before posting photos of his newborn in a touching Instagram post. In that emotional caption, the new dad shared that he never thought fatherhood would be in the cards for him while he was growing up.

"As a gay kid, I never thought it would be possible to have a child, and I'm grateful for all those who have paved the way, and for the doctors and nurses and everyone involved in my son's birth," he wrote. "Most of all, I am grateful to a remarkable surrogate who carried Wyatt, and watched over him lovingly, and tenderly, and gave birth to him."

"It is an extraordinary blessing — what she, and all surrogates give to families who can't have children," Cooper said. "My surrogate has a beautiful family of her own, a wonderfully supportive husband, and kids, and I am incredibly thankful for all the support they have given Wyatt and me. My family is blessed to have this family in our lives."

Cohen celebrated little Wyatt's arrival on Instagram as well, writing alongside alongside a photo of Cooper and his new baby boy, " 'New life, new hope!' Wyatt Cooper, you couldn't have come at a better time! I know a friend who can't wait to meet you! ♥️"